Having helped South Africa to a 3-1 Davis Cup victory over the Netherlands in Potchefstroom earlier this month, his focus for the next few weeks will be on the US circuit before returning for more Davis Cup action.

“I’m back in the States now,” 35th-ranked Anderson told Road to London 2012. “I played Atlanta last week which was OK. I lost in the quarter-finals [to Luxembourg’s Giles Mueller] which obviously wasn’t the result I wanted but it’s just the start of the summer.

“I have a week off now which I am spending in Chicago and my next tournament is Washington next week.

“Davis Cup was a great week. I was very happy to be back in SA and helping the team to a win. Potchefstroom was a very good venue which the whole team enjoyed. ]

“We are looking forward to the next tie against Croatia in September. It will be a tough tie but we are up for the challenge.

“So it’s a busy schedule coming up but one of my favorite times of the year.” 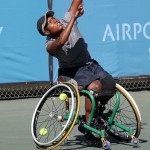 Montjane is all smiles after Swiss Open win

Tokyo looms, again, We don’t know for sure in what shape of form the Olympics and Paralympics will take place in July to September and if anything 2020 taught us to take nothing for granted. What we do know is that if Tokyo 2020 +1 does go ahead, it will do so against a new-found back drop where simply taking… END_OF_DOCUMENT_TOKEN_TO_BE_REPLACED