Early next month it will be a year since Tazmin Brits thought her Olympic dreams had been left in in tatters in the veld alongside the road from Potchefstroom to Klerksdorp.

A javelin bronze medallist at the 2010 Junior World Championships in Moncton, Canada the world was surely the oyster for the 19-year-old.

But the oft-used cliche about how life can change in the blink of an eye was particularly apt for Brits. “It was a Tuesday, 15 November,” Brits, who turns 22 in January, told Road to Rio 2016 on Wednesday. “I was on my way home after my training session, super happy and all hyped up. My coach [Terseus Liebenberg] was so positive that I could easily qualify for the 2012 Olympics. I got home and told my parents the wonderful news and then a friend of mine were on our way back to Klerksdorp from Potchefstroom after going out with some friends when it happened.

“I looked down at my phone for a split second to read a text message and when I looked up there was a bend in the road. I misjudged the bend, went on to the gravel and panicked!

“I pulled the car back too quickly, causing it to roll and skid form side to side for some distance into the veld.

In the months to follow her life must indeed have felt like it was over. “I had absolutely no cuts or external wounds except my lip had been cut on the inside from my face hitting the sand. But I broke my pelvis in five places, my bladder burst and my colon was torn.┬á I was rushed to Mooimed Clinic in Potch where they performed an emergency operation due to the internal bleeding.┬á I was in ICU for 14 days. After the first five days they then operated on me as due to the breakages in my pelvis my hip was displaced on my right side and they had to bring it back in line and place two titanium screws in the back.

“I was in hospital for always two months where I was only allowed to lay on my back.┬á I received extensive physiotherapy to assist with the strengthening of my muscles which had collapsed in my thighs and calves and to strengthen my hips. Once discharged I was in a wheelchair for about two months.”

But there’s light at the end of the tunnel. “The specialist has been very pleased and amazed at my recovery too date.┬á I attribute this to a positive attitude and determination. I have been in rehabilitation and undergoing biokinetics in order to assist with my injuries up until the end of August.”

Miraculously Brits started training again at the end of August.┬á I do gym training in the morning and evening and I do technique twice a week. “I should be back next year and I am very positive and confident that I will be part of the 2014 SA Olympic Team. This is all I am focused on and I am training very hard for it.

“This set back in my life has been a difficult pill for me to swallow as well as a life lesson.┬á Too often we take things for granted and within a split second life can throw you a curve ball.┬á believe that I have been given a second chance at life and that my talents are God given and all the glory to God!!

Says Brits’ proud mom Zeldine: “We are not sure of the dates of all the competitions yet, but as soon as one comes up she is going to try and compete. She is extremely positive and lives, eats, dreams ÔÇô javelin and the Olympics at the moment.”

Cornel wins in the wind 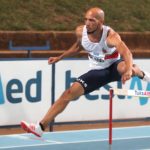