A mouth-watering line up of matches will make up Sunday’s Nike Junior Tour Masters at the Kainos Tennis Academy in Stellenbosch.

In Saturday’s semi finals, played in perfect conditions, two top seeds qualified for the finals with a sprinkling of lower seeded players making it through to the last day.

The girls Under-12 and 14 favourites, Nadine de Villiers (Gauteng Central) and Theresa van Zyl (Gauteng North) both won through to the final without losing a set. De Villiers beat Ciney Bekker of South West Districts 6-2 6-2, whilst van Zyl scored an impressive 6-3 6-3 win over national champion Janet Koch of Boland.

In Sundays Under-12 final, de Villiers will come up against Zani Barnard of Northern Cape, who upset another national champion, Wilanie van Zyl 4-6 7-6 (4) 6-4 in a three hour thriller, which proved to be the match of the day.

Van Zyl in the Under-14 girls final will have to pull out all the stops when she meets the inform Ilze Hattingh of KwaZulu Natal who was a comfortable 6-3 6-3 winner over Nelise Verster of Free State.

In the boys Under-12 final,┬á Local hero Calvin Jordaan, will come up against Gavin Morris of Durban. The two played each other in the final round robin group match, which Jordaan won, however with that being the first match Morris lost all year, Jordaan will have to fight hard on Sunday to repeat the win. In the semi finals, Jordaan beat Jurgen Badenhorst (Boland) 6-4 6-2, while Morris was a runaway winner against Pretoria’s Cules Gerber 6-1 6-1.

In the boys Under-14, Philip Franken, the wild card entry, from Boland, was never troubled by Philip de Bruyn (Gauteng North) winning 6- 6-2 in less than an hour and will face another fellow Cape player, Trent Botha in the final. Botha was a comfortable 6-1 6-2 winner over Michiel van Schoor of Boland. 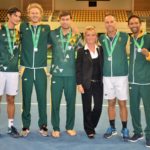 Anderson into 4th round

Tokyo looms, again, We don’t know for sure in what shape of form the Olympics and Paralympics will take place in July to September and if anything 2020 taught us to take nothing for granted. What we do know is that if Tokyo 2020 +1 does go ahead, it will do so against a new-found back drop where simply taking… END_OF_DOCUMENT_TOKEN_TO_BE_REPLACED