This, after his excellent display at the BNP Paribas Masters in Indian Wells, California where he reached the quarter-finals.

En route to the quarters Anderson accounted for world No4 David Ferrer of Spain and Frenchman Gilles Simon (No13).

The 26-year-old Anderson has now moved up to 29th spot on the world rankings, one spot lower than his highest to date which was 28 (on two occasions).

His Californian success saw him make the highest upward move in the top 50, along with Finland’s Jarkko Nieminen who moved up to 49th spot.

Moodie back on track 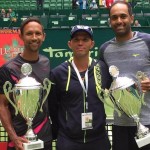 SA’s Klaasen adds another doubles title to his CV

Tokyo looms, again, We don’t know for sure in what shape of form the Olympics and Paralympics will take place in July to September and if anything 2020 taught us to take nothing for granted. What we do know is that if Tokyo 2020 +1 does go ahead, it will do so against a new-found back drop where simply taking… END_OF_DOCUMENT_TOKEN_TO_BE_REPLACED