Kevin Anderson got his 2011 ATP campaign off to a bang in Brisbane on Tuesday with a first-round victory.

This after Anderson was scheduled to meet Spain’s Marcel Granollers in the first round. But Granollers pulled out with an ankle injury meaning that Davis Cup player Luczak made the main draw as a lucky loser.

Ranked 61st on the ATP Tour rankings list Anderson would also not be complaining as Granollers is ranked 42nd in the world.
Luczak is ranked 137th.

The match lasted just 71 minutes as the journeyman had no answer for Anderson who blasted 18 aces to his four.

Speaking on the tournament website, Luczak said: ÔÇ£I found out at about 10:00 am that I was back in there,ÔÇØ Luczak said.
ÔÇ£Yesterday I had an inkling [of a last minute call-up]. I saw I would be the No1 lucky loser so I asked around the office if there was anyone who could pull out and they told me Marcel had an iffy ankle. We are good friends, playing in the same team in German club tennis ÔÇô I don’t know if he was doing me a favour or not but he didn’t want to push it [the ankle injury].ÔÇØ

Once he finally got the word, Luczak tried to swat up on Anderson ÔÇô but all to no avail. ÔÇ£I thought I did the right things but he just played too good,ÔÇØ he said. ÔÇ£All I could do was stand there and think, ‘Wow, that’s a good serve’.ÔÇØ

Luczak received a call-up as a lucky loser after a gut-wrenching loss in the final round of qualifying on Monday.

Anderson will now play Spanish sixth seed Feliciano Lopez in the second round. Lopez, currently ranked 32nd in the world, is the defending SA Open champion and expected to defend his title at Montecasino in Johannesburg in the 2011 tournament that starts on 31 January.

Sithole, Montjane go down at Wheelchair Masters in US 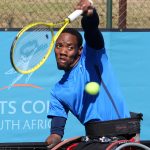 Sithole, Montjane downed at US Open

Tokyo looms, again, We don’t know for sure in what shape of form the Olympics and Paralympics will take place in July to September and if anything 2020 taught us to take nothing for granted. What we do know is that if Tokyo 2020 +1 does go ahead, it will do so against a new-found back drop where simply taking… END_OF_DOCUMENT_TOKEN_TO_BE_REPLACED