Not even 14 aces could save our Kevin Anderson from defeat in the SAP Open tennis tournament in San Jose, California, writes Mark Etheridge.

It’s not often that Anderson gets out-aced but on this occasion defending champion Milos Raonic sent down 16 aces of his own as the Canadian went through to the semi-finals in straight sets, 7-5 7-6 (3).

Anderson also had two double-faults and failed to break the big-serving Raonic once during the match that lasted an hour and 42 minutes.

Anderson was seeded sixth for the $531,000 tournament and Raonic third. The two have never faced up until this match.

Eight of Raonic’s aces came in the first set and the other eight in the second set. “Obviously, my job was to take care of my serve. That’s the most important thing,” Raonic said. “If you fall behind, it’s easy for him to close out the set.”

Raonic will now come up against America’s Ryan Harrison in the semi-finals. 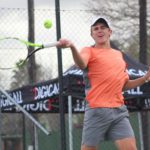 Stars of the future in the mix for Masters honours

Montjane in the mix for SA at Aussie Open

By GARY LEMKE in Tokyo On the third day of staying in the Paralympic village bubble “it” finally dawned on me. “It” wasn’t the sheer visual aspect of the 4 000-plus Paralympians with disabilities all in the same environment of towering 17-storey apartments and surrounded by a 4km perimeter fence. Admittedly, that is the initial and most common conclusion of… END_OF_DOCUMENT_TOKEN_TO_BE_REPLACED