This after he went down to France’s Richard Gasquet in the third round at Flushing Meadows, New York.

Anderson went down in straight sets 4-6 6-7 (7-3) 7-5. In the previous round he had seen off the challenge of Brazilian 26th seed Thomaz Bellucci.

Played on court 11, the match lasted two and half hours. The lanky South African had a first-serve percentage of 63% compared to his opponent’s 57% and served one less ace, eight compared to Gasquet’s nine.

It was in the unforced errors statistic though that the story of the match unfolded, with Anderson’s total of 40 almost double that of Gasquet’s 23. Anderson hit 35 winners to the 24-year-old victor’s 43.

Anderson’s interest in the doubles is also over as he and Romanian partner Victor Hanescu conceded a walk over to Germany’s Florian Mayer and Rogier Wasen of the Netherlands.

But our top-ranked doubles player Wesley Moodie’s interest in the open is anything but over. Moodie and Belgian partner Dick Norman accounted for the Spanish combination of David Marrero and Ruben Ramirze Hidalgo 6-3 3-6 7-6 (7-5).

The tournament’s 10th seeds now take on Brazil’s Marcelo Melo and Bruno Soares in the third round.

Moodie and American partner Lisa Raymond have advanced to the second round of the mixed doubles competition. 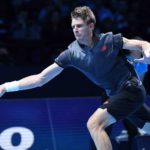 Anderson comfortably through to third round