There were mixed fortunes for South Africa’s two representatives in the men’s singles at the French Open in Paris, when Kevin Anderson won his second round match and Lloyd Harris lost his.

Initially, the match was delayed by almost four hours because of rain and subsequently wet playing surfaces. However, once the match started on a near-deserted Court 9, the 34-year-old Anderson produced some vintage touches, much like he showed in his opening match.

He was off to a flier in the opening two sets which he completed in just over an hour. He broke the world No 24 Lajovic twice in the opening set for a 6-2 win.

Anderson, who has dropped to 188 in the world rankings after a year of injury setbacks, had to harder in the next set. He had to wait for the 10th before he broke serve to wrap up the set 6-4.

There was an early third-set hiccup for Anderson when he dropped serve in the fourth game, but he fought back to reverse the fortunes in the next game. After this exchange of breaks, the set remained on even keel until the 10th game when Anderson, rather unexpectedly, dropped serve to surrender the set 6-4.

The fourth set was almost a carbon copy of the third and after Lajovic won 6-3 the fifth set was needed to separate the players.

Anderson played his winning hand late in the final set when he broke Lajovic’s serve and closed out the game for a slot in the third round. He will now play 13th seed Andrey Rublev of Russia. 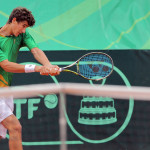 Harris home on a high after three victories on the trot

Tokyo looms, again, We don’t know for sure in what shape of form the Olympics and Paralympics will take place in July to September and if anything 2020 taught us to take nothing for granted. What we do know is that if Tokyo 2020 +1 does go ahead, it will do so against a new-found back drop where simply taking… END_OF_DOCUMENT_TOKEN_TO_BE_REPLACED