Kevin Anderson returned to Pista 2 at the Barcelona Open on Wednesday and left it as he did the first round ÔÇô victorious.

He needed just under two hours to defeat Delbonis. With aces hard to come by on the slow clay-court surface, honours were shared at five apiece, as was the double-fault count (2-2).

In fact the match was probably a lot closer than Anderson, ranked 32nd on the ATP Tour rankings, would have liked. Their first service percentage was also identical at 71% each.

Both players had their service broken on one occasion during the match.

Anderson will be in action again on Thursday when he takes on 20th ranked Fernando Velasco.

The two have only met on one occasion, and on the same surface as this tournament is being played on. Velasco won a three-setter, 6-7 6-2 6-3 in Estoril, Portugal last year.

Verdasco, who had a first round bye, is seeded ninth for the tournament compared to Anderson’s 13th.

Wes into US Open quarters 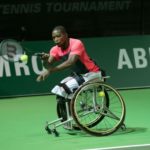 Maripa sets up clash against world No1 in Rotterdam 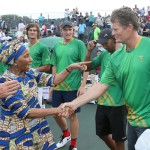 SA win one, lose one but take the overall Davis Cup victory

By GARY LEMKE in Tokyo On the third day of staying in the Paralympic village bubble “it” finally dawned on me. “It” wasn’t the sheer visual aspect of the 4 000-plus Paralympians with disabilities all in the same environment of towering 17-storey apartments and surrounded by a 4km perimeter fence. Admittedly, that is the initial and most common conclusion of… END_OF_DOCUMENT_TOKEN_TO_BE_REPLACED