Kevin Anderson is safely through to the next round of the Barcelona Open in Spain, writes Mark Etheridge.

Our top-ranked singles player beat little known Tunisian Malek Jaziri in straight sets to advance to the second round.

Ranked 32nd in the world at the start of the week, Anderson needed just an hour and 12 minutes out on the clay surface of Pista 2 to come up trumps 6-2 6-3. The lanky Johannesburg born but United States based player fired five aces compared to Jaziri’s three and, unusually for his form of late, had no double faults against his name.

He won 74% of first service points and had a 69% first service percentage. He ended the match without having his service broken and broke the 87th ranked Jaziri on three occasions, twice in the first set and once in the second set.

It was the first time that the two players had come up against each other.

Seeded 13th for this tournament, Anderson now comes up against 21-year-old clay-court specialist Federico Delbonis of Argentina. Left-hander Delbonis is currently ranked 133rd in the world and this encounter will also be the first time these two have faced off. 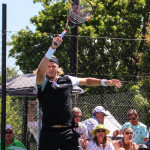 Stars of the future head for Bloemfontein

By GARY LEMKE in Tokyo On the third day of staying in the Paralympic village bubble “it” finally dawned on me. “It” wasn’t the sheer visual aspect of the 4 000-plus Paralympians with disabilities all in the same environment of towering 17-storey apartments and surrounded by a 4km perimeter fence. Admittedly, that is the initial and most common conclusion of… END_OF_DOCUMENT_TOKEN_TO_BE_REPLACED