Both won their respective categories in the first race of the 2009 BSG/Energade Series in Midmar on Sunday.

This time though, Steyn was not able to dominate as she has been doing in the Momentum Health Teavigo Duathlon Series. Instead she was run very close by Kate Roberts with only six seconds separating them on the line.

The 600metre swim saw Roberts emerge in front (8min 31sec) with junior Lauren Dance next out in 8:39. Then came Steyn (8:42), Carla Germishuys (8:46) and Riana De Lange ÔÇô who is deep in preparation for the World Long Distance Championships ÔÇô was fifth out of the water (8:55).

The conditions were unusually chilly with rain having fallen in the morning. Out on the undulating 20km bike leg ÔÇô the series is a sprint series – the legal drafting quickly saw the top five regroup.

De Lange struggled on the run and lost time as did Dance and Germishuys, but Roberts and Steyn ran side by side over the 5km run leg, until Steyn was able to break away in the final kilometre to cross the line 1:00:53 ahead of Roberts 1:00:59. Germishuys was third 1min 22sec adrift.

Schoeman clocked 6:39 for the 600m wetsuit swim with another Junior, Abrahm Louw next out in 7:26. Then the big guns emerged, Eksteen, Wolfaardt, Felgate, Glen Gore, Sander Berg and Anton Storm, virtually within five seconds of one another.

Schoeman was caught half way into the bike leg and was then subsequently run right out of the race.

With the cycle being draft legal, there were only the occasional testing surges as the riders were feeling each other out in the first race of the series. But no-one made a serious attempt at trying to breakaway.

In the final 5km run it was Sander Berg, Eksteen, Abrahm Louw, Wolfaardt and Chris Felgate who set a cracking pace. Wolfaardt cranked it up another notch after 3km, opening a 10m gap and then proceeded to gradually move away from the chasing quartet. In the final 300m, on a steep downhill, Berg threw in a surge to lose Eksteen to cross the line for second.

It was a closely contested affair with only 23 seconds separating the top five, which bodes well for the rest of the series and a clear indication that the sport is becoming more and more competitive.

Murray motors to second spot in US triathlon 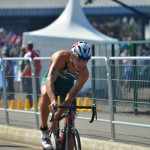 Sullwald satisfied with progress in Japan

By GARY LEMKE in Tokyo On the third day of staying in the Paralympic village bubble “it” finally dawned on me. “It” wasn’t the sheer visual aspect of the 4 000-plus Paralympians with disabilities all in the same environment of towering 17-storey apartments and surrounded by a 4km perimeter fence. Admittedly, that is the initial and most common conclusion of… END_OF_DOCUMENT_TOKEN_TO_BE_REPLACED