Friday’s 19th stage of the Tour de France was another day of survival for Africa’s Team Dimension Data for Qhubeka.

Primoz Roglic (Team LottoNL-Jumbo) won the stage after a masterclass descent off the top of the Col d’Aubisque.

Friday’s stage was the final mountain stage of the race and for Team Dimension Data, it was a day of survival with nearly 5,000m of climbing packed into the 200-kilometre stage.

Once again it was a big fight for the early breakaway, with many teams still hoping to salvage something from this year’s race.

Eventually it was 18 riders who went clear and Dimension Data had Tom-Jelte Slagter in the front group.

The stage was extremely difficult and Team Katusha, who had missed the break, kept the pressure on from the peloton to make it that much more testing.

This saw the break only ride out to around a four-minute advantage before the gap started coming down.

After already covering the Col de Aspin, the race hit the Col du Tourmalet and this is where the GC race kicked off.

The increase in pace saw riders being dropped from the front group as well as the peloton. Slagter was one of the riders to be distanced at this point in the race.

After the Tourmalet, it was on to the final climb of the Tour de France, the Col d’Aubisque.

Team LottoNL-Jumbo clearly had a plan and set the race on fire with Robert Gesink powering up the climb to isolate the GC contenders. Attacks then followed by the Dutch team’s GC contenders, Steven Kruijswijk and Roglic.

Team Sky and Tom Dumoulin were forced to respond and this saw an elite group of 10 riders form over the top of the climb, with the break also caught at the summit.

On the 20km downhill to the finish line, Roglic did not let up and kept the pressure on with a lightning-fast descent. Dumoulin could not hold the wheel of the Slovenian as he pulled open a gap on the GC contenders. Roglic would not be seen again and took a fine stage win.

With just two stages remaining, Dimension Data were happy to ensure all five of their riders got through the day’s tough stage.

The team will now aim to recover somewhat during Saturday’s time trial stage before putting up a fight for the final stage win on the Champs-Elysee in Paris on Sunday. 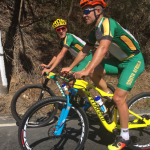 SA cyclists look back back at their Olympic experience

Tokyo looms, again, We don’t know for sure in what shape of form the Olympics and Paralympics will take place in July to September and if anything 2020 taught us to take nothing for granted. What we do know is that if Tokyo 2020 +1 does go ahead, it will do so against a new-found back drop where simply taking… END_OF_DOCUMENT_TOKEN_TO_BE_REPLACED