Khotso Mokoena won the latest battle for bragging rights as the best long jumper in Africa with victory at the final ASA Yellow Pages Series meeting in Germiston.Mokoena, the silver medallist from the Beijing Games, proved that winning becomes a habit with a leap of 8.10m that was good enough against opposition from around the continent and he now heads for the ASA Senior Track and Field Championships full of confidence. His best for the season is 8.15m (he leapt 8.34m in Beijing), so he might not be at the top of his form, but the old clich├® rings true that you can only beat who they put up against you. And Mokoena is doing just that.

Also confident for the upcoming blue riband meet in Stellenbosch will be 800m ace Mbulaeni Mulaudzi, a comfortable winner in 1min 45.65sec in Germiston, in his first race over his favourite distance this season, while Olympian Jean van Deventer continued his middle-distance dominance, this time taking the 3,000m (8:02.79).

Sunette Viljoen has been dominating the javelin scene this year and already qualified for the World Championships in Berlin in August. Words was that she was aiming at the South African record in Germiston, but her 59.54m winning through was off the 62.80m target.

Germany brought their top women hammer throwers, including the current world champion, Betty Heidler, and they showed their class. Heidler took victory in 74.25m and to show how far ahead of South Africa’s finest they are can be seen that the national record stands at 59.37m and third place on the night fell to a 68.32m throw.

Saudi Arabia’s Bandar Sharahili is a sub 50 secs 400m hurdler, but on the occasion he was no match for the in-form LJ van Zyl, who crossed the line in 49.68. 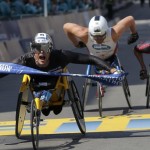 Van Dyk digs deep and fights back for silver… next stop, London! 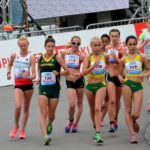