Team SA’s women’s gymnasts who participated in the 2018 Artistic Gymnastics World Championships have gracefully bowed out of the competition after battling it out with the world’s best.

This was the first time the Artistic Gymnastics Championships were held in the Middle East in Doha, Qatar from 25 October to 3 November, which featured competitions for senior men and women’s categories.

Team SA only participated in the women’s competition in the vault, uneven bars, balance beams and floor exercise events. They competed among the best gymnasts in the world such as Simone Biles, who dominated the competition, alongside 144 gymnasts competing in the women’s all-around qualification.

Caitlin Rooskrantz led the team with the highest score. Rooskrantz, a top finisher for Team SA, secured a rank of 59th in the women’s all-around qualification with a total score of 49.198. This 2018 SA champion battled her way to finishing in the top half of the competition, and with solid routines, she led the entire contingent of African gymnasts.

Angela Maguire also performed remarkably; she had a clean competition, securing 87th with a total score of 46.866 in the women’s all-around qualification.

The World Championships were a big step towards qualifying for the 2020 Tokyo Olympics.

Meanwhile, the South African Gymnastics Federation is ready to host the Region 5 competition that will take place from 2-4 November in Gauteng. It will feature events in the men’s and women’s artistic, rhythmic, trampoline and aerobic gymnastics. 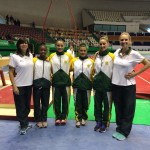 Nine-strong SA team in the medals at African Championships

Tokyo looms, again, We don’t know for sure in what shape of form the Olympics and Paralympics will take place in July to September and if anything 2020 taught us to take nothing for granted. What we do know is that if Tokyo 2020 +1 does go ahead, it will do so against a new-found back drop where simply taking… END_OF_DOCUMENT_TOKEN_TO_BE_REPLACED