South Africa and Nigeria played to an entertaining goalless draw in their Group A 2015 Africa Cup of Nations qualifier at the Cape Town Stadium on Wednesday night.
The result saw Bafana Bafana lying second in the group on four points behind Congo Republic, who defeated Sudan earlier in the day to move to six points, while Nigeria are third on one point.
Coach Shakes Mashaba made two changes to the starting line-up from the team that beat Sudan 3-0 last Friday, with Keagan Dolly and Tokelo Rantie making way for Sibusiso Vilakazi and Oupa Manyisa.
South Africa created the first clear chance of the game in the sixth minute. Mandla Masango’s cross from the right of the box was deflected into the path of Manyisa, who shot on target but saw his effort well blocked by Efe Ambrose.
The home team looked the more fluent of the two sides in attack, though lone striker Bongani Ndulula was often left a little isolated and struggled to have any influence on the game despite his admirable industry.
Nigeria created nothing more than half chances, the best of which fell to Nosa Igiebor in the 36th minute, only for the attacker to shoot off target under pressure from Bafana Bafana’s defence.
However, in Ahmed Musa and Emmanuel Emenike, the Super Eagles had arguably the two most dangerous players on the pitch. However, they weren’t receiving particularly good service from their midfield, mainly due to good work from the likes of Andile Jali and Dean Furman.
Bafana made a change at the start of the second half, with Tokelo Rantie replacing Ndulula up front in a straight swap. The English-based striker had to wait until just past the hour mark to have his first sight of goal, but then he only managed to hit the side netting from a tight angle.
Nigeria very nearly broke the deadlock with just 10 minutes to play when Musa’s cross from the right found substitute Christian Osagona. He headed on target, but Erick Mathoho positioned himself brilliantly to clear off the goal line.
Tokelo Rantie then had the best chance of the match, using his pace to sprint in behind the Super Eagles’ defence and find himself one-on-one with Austin Ejide, but the goalkeeper made a fine save to keep the score line blank. – Back Page Media 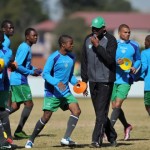 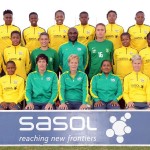 Banyana look to book their Games ticket to Brazzaville

Tokyo looms, again, We don’t know for sure in what shape of form the Olympics and Paralympics will take place in July to September and if anything 2020 taught us to take nothing for granted. What we do know is that if Tokyo 2020 +1 does go ahead, it will do so against a new-found back drop where simply taking… END_OF_DOCUMENT_TOKEN_TO_BE_REPLACED