South Africa’s national women’s football team, Banyana Banyana, have made history by qualifying for their maiden Fifa Women’s World Cup following a 2-0 victory over Mali in the semi-finals of the 2018 Women’s Afcon, played in Ghana on Tuesday.

Banyana Banyana sealed the deal by scoring two goals in each half, by forward Thembi Kgatlana and defender Lebohang Ramalepe, to secure tickets to the soccer showpiece scheduled for France in June next year.

Banyana will now face Nigeria in the final on Saturday after previously defeating them in their first match of the tournament. Nigeria booked their place in the final after they beat Cameroon in their semi-final clash.

Under the leadership of coach Desiree Ellis the World Cup qualification comes as no surprise, as Banyana have played the most enterprising football in the competition so far.

Captain Janine van Wyk was the first to threaten the Mali goal with a long range free kick, but her powerful effort went just wide as Banyana started the match on the front foot. Jermaine Seoposenwe was then blatantly brought down in the box on the 26th minute, but the Tanzanian official waved play on much, to the chagrin of the Banyana Banyana bench.

Banyana then took the lead in the 31st minute through Thembi Kgatlana, who gladly accepted a misused clearance by the Mali defender to score her fifth goal of the tournament. Banyana dominated this semi-final encounter for long periods with their famous possession football, but could not add to the 1-0 advantage in the first half.

Banyana were never put under pressure and maintained composure, although Van Wyk was booked for a professional foul in Mali’s rare attack. Banyana then made the game safe in the 81st minute when overlapping Lebogang Ramalepe’s pile driver beat the Mali keeper hands down.

After the goal, Mali’s heads dropped as Banyana easily saw the game out.

Van Wyk, who made her Banyana Banyana debut in 2005, was emotional after the match, ‘We are extremely happy, we have worked so hard in this tournament.

‘For some of us we have been part of this team for quite some time and have missed out on some big opportunities in the past, but here we are today, we have done it, we have qualified for the world cup and it’s an amazing feeling.’

Meanwhile, coach Ellis has entered the history books by being the first coach to lead the South African senior women’s national team to a Fifa World Cup. 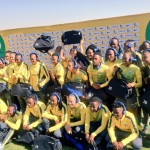 Rio-bound Banyana Banyana face up to their toughest challenge yet 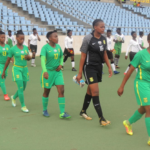 Basetsana beaten by Ghana in U20 World Cup qualifying preparation

Tokyo looms, again, We don’t know for sure in what shape of form the Olympics and Paralympics will take place in July to September and if anything 2020 taught us to take nothing for granted. What we do know is that if Tokyo 2020 +1 does go ahead, it will do so against a new-found back drop where simply taking… END_OF_DOCUMENT_TOKEN_TO_BE_REPLACED