Banyana Banyana and Nigeria played to a one-all draw in an action-packed international friendly encounter played at the Royal Bafokeng Stadium, in Phokeng, near Rustenburg on Sunday.

The Sasol-sponsored South African senior women’s team will face the Nigerians in a return international friendly encounter in Abuja, Nigeria on 23 June.

Experienced Nigerian striker Stella Chinyere’s goal broke the deadlock 17 minutes after the break, after she latched on to a long overhead ball,┬áand run into the home team’s penalty area, before netting┬ádespite the diving effort of Banyana Banyana goalkeeper Roxanne Barker.

But the South Africans showed character and determination and were rewarded with an equalizer 12 minutes before fulltime, when a cross from the left found Portia Modise, who fired home from close range to net her 69th goal in her 90th appearance for Banyana Banyana.

This was also the third goal in as many matches for the Palace Super Falcons (Sasol League Free State) player, since returning to the national side. Modise played on the left-hand side of an attacking midfield ÔÇô rather than her usual role upfront.

The South Africans suffered a setback before the start of the match when tough tackling central defender Janine van Wyk suffered an injury during the pre-match warm-up phase and was replaced. Refiloe Jane took over at right back with regular fullback Zamandosi Cele moving to the centre of defence next to Amanda Sister.

The match marked the second game in charge for Nigerian coach Ikhana Kadiri, whose new-look Nigerian outfit would have been a bit of a surprise to the South Africans.

Goalkeeper and captain Dede Uzoaru, midfielders Ebere Ngozi┬á and Mbachu Chinyere, plus striker Oparanozie Ugochi were the only familiar names from the Nigerian side that lifted the African Women Championship 2010 trophy in Ekurhuleni. 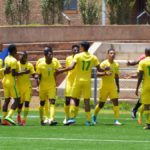 Amajita gearing up for COSAFA U20 Champs opener

By GARY LEMKE in Tokyo On the third day of staying in the Paralympic village bubble “it” finally dawned on me. “It” wasn’t the sheer visual aspect of the 4 000-plus Paralympians with disabilities all in the same environment of towering 17-storey apartments and surrounded by a 4km perimeter fence. Admittedly, that is the initial and most common conclusion of… END_OF_DOCUMENT_TOKEN_TO_BE_REPLACED