Banyana Banyana head coach Desiree Ellis has announced a squad of 24 players to face Lesotho in next week’s second round of the 2018 Africa Women’s Cup of Nations qualifiers.

The first leg will be played at the Setsoto Stadium in Maseru, Lesotho with kick-off at 3pm.

‘This is the start of the road to the World Cup in France. We’ve played Lesotho before and even though we beat them, this is a new game and a different occasion,’ said Ellis. ‘Victory will get us to the 2018 AWCON in Ghana, but we’re all aware that no game is as easy as it seems and we have to be on top of our game to get a positive result in the first leg. We need to start on a good footing so we can finish the business at home.’

Ellis has kept the bulk of the squad that played in the Cyprus Cup in March but has included three new faces in the squad – Karabo Dhlamini (women’s U17) and Khanya Xesi (women’s U20 squad), as well as Hilda Magaia, who has starred for TUT this season.

The former Banyana Banyana captain has also recalled three uncapped players – Mapaseka Mpuru, who was with the senior women’s national team during preparations for the 2016 Rio Olympic Games; Thato Letsoso, who was in the squad for the Burkina Faso clash; and Gaby Salgado, who was at the selection camp for the 2017 Cosafa Cup and at the 2014 AUSC Region 5 Games in Bulawayo, Zimbabwe.

After her good performances in the Cyprus Women’s Cup, Noko Matlou has been included as a striker – a position she now regularly plays for her club.

Also making a return after a long absence due to injury is midfielder Mamello Makhabane. She was injured during the 2016 Sasol League National Championship and has only recently returned to the game.

Goalkeeper Yolula Tsawe is also back – she was last in the squad for the friendly international against Sweden in January this year.

‘We’ve mixed the squad with a bit of youth and experience. We were fortunate to attend USSA Selection trials in Cape Town recently, and also watched all the Sasol teams in Gauteng last Saturday as well as having national selection trials the next day. We’re also allowing the overseas-based players to settle in at their clubs and this gives us an opportunity for other players to raise their hands,’ added Ellis.

None of the overseas-based players has been called up.

Also not in the squad is striker Sduduzo Dlamini who has a hamstring injury, and Kholosa Biyana, who has just recently returned to the game after recovering from injuries that kept her out of the Cyprus Cup squad.

Banyana Banyana assemble for camp in Johannesburg next Friday and will later travel to Bloemfontein where they will have their training camp and will then move to Lesotho on Sunday, 3 June.

The return match will take place at a venue still to be confirmed on Sunday, 10 June.

Photo: Banyana in training this week, by Sydney Mahlangu/BackpagePix 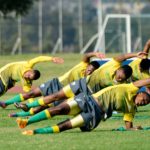 Quiet year for Banyana but they’re building for big things

Basetsana gear up to tackle Tanzania

Tokyo looms, again, We don’t know for sure in what shape of form the Olympics and Paralympics will take place in July to September and if anything 2020 taught us to take nothing for granted. What we do know is that if Tokyo 2020 +1 does go ahead, it will do so against a new-found back drop where simply taking… END_OF_DOCUMENT_TOKEN_TO_BE_REPLACED