South Africa’s national rowing coach Roger Barrow has spoken about how he is managing to interact with his athletes during lockdown.

In 2016, the World Rowing Federation named him Rowing Coach of the Year after he guided a small pool of athletes to Olympic gold at the 2012 London Olympics.

Four years later, Barrow again alerted the world to his prowess as a coach when he managed to qualify five boats for SA at the Rio Olympics after he identified a group of rowers for elite training. All five crews made the A-finals at the Games.

Now Barrow has been using the Zoom App, which makes having virtual meetings and video conferencing a lot easier. The athletes are at their homes training on a rowing machine and logged on to the Zoom App. They can interact while their actual training can be viewed on video by everyone in the group.

The sessions with the rowers of SA’s Olympic training squad usually start with chatting and then training starts.

‘We have tried to create a virtual room which enables the whole team – doctors, physiotherapists and sports scientists – to still interact with the rowers and monitor what is happening,’ Barrow who is based at the University of Pretoria (Tuks) told African News Agency.

‘The idea is to try and stick to what we did before. Any form of disruption is detrimental to an athlete’s motivation. In these uncertain times it is easy to get demotivated.

‘Especially since most of the international competitions have either been cancelled or postponed. Athletes might think there is no purpose in continuing to train.

‘One of the positives about all of this is that we now got more time to analyse the data – power output, heart rate etc. The goal now is not to get the rowers to perform to the best of their abilities.

‘The focus is to improve on certain specifics.’

The national coronavirus pandemic lockdown has been massively disruptive, and Barrow has been trying to devise an innovative plan to keep athletes as close to training routine as possible.

On Fridays, the national squad do a yoga session together.

Barrow sprang into action when the national lockdown was announced. He approached Rand Merchant Bank (RMB) the official sponsor of the national rowing squad for help. RMB’s sponsorship was scheduled to run until the end of the Tokyo Olympics.

He was able to source equipment, mostly rowing machines, and then have it delivered timeously to the athletes’ homes.

Ramon calls it a day 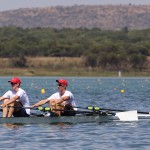 SA’s top rowers are in France, pulling for places in next year’s Olympics

By GARY LEMKE in Tokyo On the third day of staying in the Paralympic village bubble “it” finally dawned on me. “It” wasn’t the sheer visual aspect of the 4 000-plus Paralympians with disabilities all in the same environment of towering 17-storey apartments and surrounded by a 4km perimeter fence. Admittedly, that is the initial and most common conclusion of… END_OF_DOCUMENT_TOKEN_TO_BE_REPLACED