Banyana Banyana have been beaten for the first time in their 2018 Cyprus Women’s Cup campaign!

Belgium came from a goal down to defeat the South African national women’s football side 2-1 in the fifth/sixth place play-off in Larnaca on Wednesday.

Despite the two teams playing their fourth matches in eight days, the games started at a very furious pace with South Africa dictating terms.

In the 13th minute Noko Matlou found herself face to face with the opposition goalkeeper but her shot was saved.

But five minutes later she made amends when she again found herself unmarked in the box and this time made no mistake. Despite the efforts of the Belgian defence to clear it, they could only kick into the net to give South Africa a 1-0 lead.

This was Matlou’s 64th goal in 140 international appearances – and perhaps a special one as she has been brought in as a striker in this match, a position she enjoyed great success previously before converting to defence.

In the 33rd minute the Banyana Banyana defence was caught napping, and Belgium captain Tessa Wullaerts punished them with a well-taken shot, that found the top corner of goal.

Sensing danger, South Africa pulled off Regina Mogolola and brought in Lebohang Ramalepe to strengthen the right side of defence, where Belgium were having a free run.

The end-to-end game continued in the second half with sides looking for a winner. Banyana Banyana captain Janine van Wyk had a go at the Belgium keeper but her shot was saved.

Next was Matlou to try her luck when she was free on goal, but she was also denied by the keeper – it was brave-goalkeeping by Evrard as she threw herself into the shot’s path to keep the score line unchanged.

In the 60th minute, Seoposenwe found a hole in the Belgium defence but Davina Philtjens saved her shot off the line.

The Europeans were now dictating terms, with South Africa chasing shadows and could have scored in the 83rd if Yana had kept her composure. After she beat her marker, she ballooned her shot with the keeper at her mercy.

But she did make up for it with four minutes left on the clock – she was unmarked in the box and met a beautiful cross with a great header to beat Kaylin Swart and give Belgium a 2-1 lead.

Ellis made several changes but they did not have the desired effect – Chantelle Esau coming in for Melinda Kgadiete, Zanele Nhlapho making her first appearance in the tournament as she took the place of Linda Motlhalo, and Jermaine Seoposenwe making way for Kgaelebane Mohlakoana.

In the end, Belgium held on for victory to take fifth place in the tournament as they pushed South Africa all the way, especially in the second half.

Banyana Banyana ended up in position six – the same as at their inaugural tournament in 2009.

This was sweet revenge for the Europeans as they lost 1-0 to South Africa in the same competition in 2015.

This was South Africa’s first loss in the tournament, and also the first time they had conceded a goal.

In other matches, Finland took 11th place following a 2-0 victory over Hungary, the Czech Republic finished 9th after defeating Slovakia 5-2, Austria came out 7th as they edged out Wales 3-2 on penalties (both were tied at 1-1 after regulation time), while Korea DPR were 3rd – they beat Switzerland 2-1.

The late evening final was won by Spain who beat Italy 2-0.

The South Africans return home on Friday and expected to land at the OR Tambo International Airport at 10.35am. 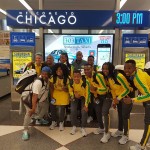 Banyana Banyana soldier on after lengthy trip to the US

By GARY LEMKE in Tokyo On the third day of staying in the Paralympic village bubble “it” finally dawned on me. “It” wasn’t the sheer visual aspect of the 4 000-plus Paralympians with disabilities all in the same environment of towering 17-storey apartments and surrounded by a 4km perimeter fence. Admittedly, that is the initial and most common conclusion of… END_OF_DOCUMENT_TOKEN_TO_BE_REPLACED