Rising star Bernard Esterhuizen raced his way to a gold medal at the UCI junior world cycling championships in Montichiari, Italy on Sunday.

That put him a split-second, literally, ahead of runner-up, Julian Palma of France.

Another South African rider, Gary Fensham, placed 37th in the same event, stopping the clocks at 1:09.009.

The son of former South African track star Wikus, Esterhuizen narrowly missed out on medals in the 200m sprint after qualifying third fastest as well as in the keirin after winning all of his heats. He finished sixth and fourth in these events respectively.

According to cycling website, www.trackcyclingsa.co.za “The win in the kilo shows that Esterhuizen has got the combination of speed and endurance to be a force in all three sprint disciplines. Winning the kilo after coming close to podium finishes in the previous events also shows that he has the ability to focus on the job at hand.”

Esterhuizen is currently based at the UCI’s World Cycling Centre in Aigle, Switzerland. He’s been there since January this year. The choice to hone his skills there is clearly paying off and this weekend’s result shows that he is well on the way to becoming a medal contender at the 2012 Olympics in London.

The gold medal is believes to be South Africa’s first medal at a Junior World track championships and veteran cycling journalist, Sean Badenhorst said Esterhuizen’s win was excellent for track cycling in South Africa. “Something like this could re-ignite interest in SA track cycling. This is the one area in cycling that we can still develop in a big way and this will go some way to this.”

Badenhorst, who edits TREAD cycling magazine, said: “The 1km time trial is no longer an Olympic event but what this event does is give an idea of Bernard’s pedigree. He was previously a good sprinter but this event is so much more of a mental and physical test and shows that he has the talent to diversity and he should definitely be in the 2012 Olympic frame of things.” 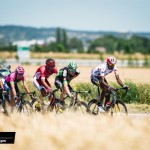 Africa’s cyclists continue to make their mark in France

By GARY LEMKE in Tokyo On the third day of staying in the Paralympic village bubble “it” finally dawned on me. “It” wasn’t the sheer visual aspect of the 4 000-plus Paralympians with disabilities all in the same environment of towering 17-storey apartments and surrounded by a 4km perimeter fence. Admittedly, that is the initial and most common conclusion of… END_OF_DOCUMENT_TOKEN_TO_BE_REPLACED