Head coach Giles Bonnet’s South Africa women’s hockey team concluded a triumphant International Series with a 3-2 win over Belgium after leading 3-1 at half-time at the University of Free State hockey centre on Tuesday.

Bloemfontein’s Lesle-Ann George scored a brace of field goals; and striker Sulette Damons also got on the score-board, Belgium replied with goals from Morgane Vouche and Emilie Sinia.

The 4-0 series whitewash has left world number 12 SA with 19 victories from their last 21 matches, which have included nine against world number four China.

George was the runaway winner of the Player-of-the-Match, while SA captain, mid-fielder Marsha Marescia’s outstanding leadership has been a feature of the series and she must be regarded as one of South Africa’s finest sportswomen.

The South Africa squad and their group of trainers will now disperse, with some returning to clubs in Holland and Belgium, while the SA-based players will continue honing their skills at regional high performance training sessions. 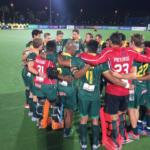 SA grind out win against Ghana in Egypt

Tokyo looms, again, We don’t know for sure in what shape of form the Olympics and Paralympics will take place in July to September and if anything 2020 taught us to take nothing for granted. What we do know is that if Tokyo 2020 +1 does go ahead, it will do so against a new-found back drop where simply taking… END_OF_DOCUMENT_TOKEN_TO_BE_REPLACED