It was business as usual as Brand du Plessis seems to have overcome a virus that has been bugging him for some time now as he convincingly won the third leg of the Momentum Health Iflex National Duathlon Series at Northern Farm on Sunday.

After rather surprising losses in the first two races (second and fourth) due to the virus, Du Plessis made short work of Cape Town winner Lieuwe Boonstra and a still out of sorts Stuart Marais. Marais had picked up a virus just before the race and was clearly not at his best, going into the race to make sure he picked up series points.

Du Plessis opened a minute gap on Boonstra and Marais in the first 5km run and then hit the mountain bike leg with the intent of maintaining that lead. If truth be told though he proceeded to open the gap even further and by the time he crossed the finish line the lead had extended to two and a half minutes over second-placed Boonstra.

ÔÇ£Things seem to be getting better now, it seems as if I have been able to shake the virus finally,ÔÇØ said an elated du Plessis after the race. Du Plessis needed 1hr and 14min to cover the 5km run, 20km mountain bike and final 2.5km run.

The win entrenches him firmly on top of the points standing having raced in all three events, finishing second, fourth and now first for a total of 56 points ahead of┬á Marais on 13 points (fourth, second, fourth) and┬á Boonstra (first, second) with 39 points.

With the next race only in August, du Plessis will now shift his focus to the Domestique Family Duathlon Series and the South African Championships.

ÔÇ£I need the mileage in the legs if I am going to be competing at World’s. Last year the lack of distance caught up with me, so the Duathlon Series at Kyalami race track is perfect as it is over a longer distance (8.4km, 37.8km, 4.2km).ÔÇØ

In the women’s race Carla van Huysteen (formerly Germishuys) was in a class of her own as he powered to a 10-minute win. In the absence of Michelle Lombardi and Andrea Steyn, she was always going to be the favourite. Van Huysteen finished in 1:30:52. The win puts her top of the points table ahead of Steyn with 39 points to the 38 of Steyn. 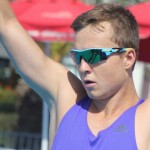 Yet another setback for champion Sullwald

Tokyo looms, again, We don’t know for sure in what shape of form the Olympics and Paralympics will take place in July to September and if anything 2020 taught us to take nothing for granted. What we do know is that if Tokyo 2020 +1 does go ahead, it will do so against a new-found back drop where simply taking… END_OF_DOCUMENT_TOKEN_TO_BE_REPLACED