Sprinter Dyan Buis continued his superb form at the Nedbank National Championships for Physically Disabled in Stellenbosch when he broke the men’s SA T38 400-metre record on Wednesday.

Buis, 23, clocked a time of 51.36 to shave 0.23sec off his own national record in cool, damp conditions on the final day of the meeting. He has only recently made the move up to the one-lap event.

It was Buis’s second gold medal of the Championships following his victory in the 100m, see picture right, and has set him up well for the remainder of the season.

Another athlete to cement her reputation as a potential world star was visually impaired sprinter Ilse Hayes, who created a buzz in the T13 100m on day two when she clocked an SA record 12.31.

That was in addition to her superb 200m run in which she recorded 26.37. At this early stage she must already be a gold medal hopeful at next year’s IPC World Championships in Doha.

Hayes won the F13 long jump gold medal in London 2012 and could become one of the darlings of the sport in the coming years , the Paralympic equivalent of Jackie Joyner-Kersee. 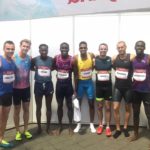 Van Zyl wraps up his season with third in Croatia 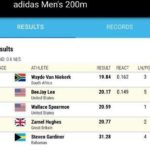 SA’s Van Niekerk leads the way around the world

By GARY LEMKE in Tokyo On the third day of staying in the Paralympic village bubble “it” finally dawned on me. “It” wasn’t the sheer visual aspect of the 4 000-plus Paralympians with disabilities all in the same environment of towering 17-storey apartments and surrounded by a 4km perimeter fence. Admittedly, that is the initial and most common conclusion of… END_OF_DOCUMENT_TOKEN_TO_BE_REPLACED