The meeting was hosted by British Cycling at the Newport Velodrome in Wales at short notice but the world’s para-cycling community jumped at the chance to compete before the year wrapped up.

Burns, right, claimed bronze in the combined C4/5 categories time trial and rode to gold in the 3km pursuit events. The results are expected to boost her the top-ranked C4 woman in the world for 2013, an achievement she held in 2009.

She was accompanied to the meeting by Dane Wilson, the C5 rider ending fourth in the 4km pursuit and a factored eighth in the time trial. He also took fifth spot in the scratch event.

Different flight scheduling saw Burns arrive in the UK earlier than Wilson. “So I arrived on Tuesday night and had an extra day at the velodrome which was very nice,” she told Road to Rio 2016. “Competition started on Friday and I rode the time time trial very late on Saturday night.

“I wasn’t happy with my time but it was good for bronze.

“The pursuit was a straight final the day after the time trial. I wasn’t feeling 100%, my knee was sore and I was tired from the previous night. The first kilometre went well and I had the British rider in my sights but then I faded and couldn’t maintain my speed. I couldn’t overtake her but I still beat her comfortably.”

Burns now faces next season with renewed confidence. “I’ve got three years to work on my pursuit and I think I could become competitive in it, although it’s never been my favourite race.

“Coming away with medals feels great even though my main competitors weren’t there. As my friend said: ‘You gotta be in it to win it!’

“Now I’m having a week’s holiday in London to celebrate a successful 2013.” 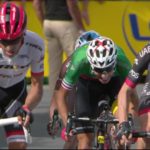 Meintjes makes up good ground in the mountains

Esterhuizen and Hoffman to race at World Championships

By GARY LEMKE in Tokyo On the third day of staying in the Paralympic village bubble “it” finally dawned on me. “It” wasn’t the sheer visual aspect of the 4 000-plus Paralympians with disabilities all in the same environment of towering 17-storey apartments and surrounded by a 4km perimeter fence. Admittedly, that is the initial and most common conclusion of… END_OF_DOCUMENT_TOKEN_TO_BE_REPLACED