“I am good,” Bolt told fans as he limped away from hospital with bandages on his feet.

Bolt’s manager Norman Peart said the athlete’s feet were pricked by thorns when he left the vehicle.

“He was taken to the Spanish Town Public Hospital, where he was treated. He has been sent home for recovery,” Peart said.

Bolt, 22, won gold medals in the 100m, the 200m and the 4x100m relay at the Beijing Olympics last August, setting world records in all three events.

His exploits made him a superstar in his homeland, and his accident sent a brief shockwave through the country.

The leader of Jamaica’s parliament, Andrew Holness, said on Wednesday that the country could breathe a sigh of relief following Bolt’s close brush with serious injury.

“The reports that we have received is that he is not seriously injured and therefore Jamaica can collectively breathe a sigh of relief,” Holness, who is also the country’s education minister, said in Parliament on a motion of adjournment.

Bolt had just returned to Jamaica from a promotional event for Puma in Boston last weekend.

The Jamaican star was scheduled to compete in an IAAF Area permit meet in Kingston this weekend, and Peart said Bolt’s team would continue to monitor his health. “He will do further tests in the next 48 hours before we can determine that,” Peart said of Bolt’s status for Saturday’s meeting.

Bolt is also down to compete in a street race over 150m at the Great CityGames in Manchester, England, on May 17 and in a meeting in New York on May 20.

Earlier on Wednesday, organisers of a June 17 meeting in Ostrava, Czech Republic, said Bolt would race the 100m there as he builds up for the World Athletics Championships in Berlin in August. 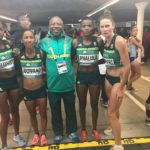