Caster Semenya, one of South Africa’s main medal hopes at the IAAF World Track and Field Championships in Berlin, Germany, takes another step towards the victor’s podium with the running of the women’s 800 metre semi-finals Monday night.

And there’ll be more pressure on those powerful shoulders to perform after the shock ousting of another fellow hope, LJ Van Zyl, in the 400-metre hurdles on Sunday night.

Semenya, the fastest woman in the world over the two-lapper this year after her 1min 56.72sec win at the African junior championships in Mauritius earlier this year, came through her heat with flying colours on Sunday.

And it was almost literally flying colours after her collision with defending world champion Janeth Jepkosgei Businei on the last bend left the latter sprawled on the track and Semenya on an almost horizontal plane for a few strides before she recovered to win her heat in 2:02:51. It┬á was the fourth fastest winning time of the six heats.

A jury of appeal later found that Businei had been tripped through no fault of her own and reinstated her into the semi-finals. This means she’ll resume battle with Semenya in the second of tonight’s three heats. The heats start at 7.30pm South African time. The first two finishers in each heat go through to the final, along with the next two fastest qualifiers.

The 18-year-old South African will be favoured to go through to the final – her time in Mauritius is a full second quicker than next best Maggie Vessey of the US’s 1:57.84 — and only experience, or should we say, lack of it will count against her.

But Vessey is in the third and final heat, so Semenya won’t have to worry about her until the final. In her heat only Businei and Russia’s Svetlana Kluyka have personal best times quicker than her. Semenya’s main worry will be the injuries picked up in her fall (her right foot and ankle took strain) but news from the camp suggests that she’ll line up.

The final of the women’s 800m will be run on Wednesday evening.

The other South African in action tonight will be Peter van der Westhuizen. The United States based middle-distance athlete is in 1,500-metre semi-final action. This after national champion Johan Cronje was knocked out in the heats placing a disappointing ninth in 3:46.45 (41st of 53 competitors).

Van der Westhuizen clocked 3:42.33 to finish fifth in his heat behind Asbel Kipruto Kiprop of Kenya (3:41:42) on Saturday. That made him 16th of the 24 semi-final qualifiers.

He’s going to be up against in his semi-final tonight. Of the 12 starters, just two have slower season’s best times than him. The first five in each semi go through automatically plus the next two fastest qualifiers. His heat goes off at 8.10pm tonight. 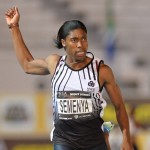 By GARY LEMKE in Tokyo On the third day of staying in the Paralympic village bubble “it” finally dawned on me. “It” wasn’t the sheer visual aspect of the 4 000-plus Paralympians with disabilities all in the same environment of towering 17-storey apartments and surrounded by a 4km perimeter fence. Admittedly, that is the initial and most common conclusion of… END_OF_DOCUMENT_TOKEN_TO_BE_REPLACED