The Amajita national men’s U20 football team are wasting no time in getting down to business as they prepare for the upcoming CAF U20 Africa Cup of Nations qualifier against Mozambique.

‘We had a good first day of training, which was nice and easy because most of the boys were playing over the weekend so we had to underload them just to make sure they are fresh,’ said Amajita head coach Thabo Senong.

‘I was quite impressed by the attendance, and I must say a very big thank-you to all the clubs – PSL, NFD, ABC and MDC – who released their players, we are quite excited with the co-operation. All we have to do is to make sure we gel quickly into a team as we are playing a very tough match against Mozambique.

The second leg is scheduled for Sunday, 20 May at a venue yet to be confirmed in South Africa. Kick-off is also at 3pm.

Senong has called up 28 players to the camp – which will be trimmed down to 20 before the squad’s departure to Mozambique.

Of the 28, only three could not be released by their clubs – Sibusiso Mabiliso (Amazulu), Bradley Cross (Bidvest Wits) and Belgium-based Keith Groeneveld.

‘It’s quite unfortunate that we couldn’t get those players, but we don’t see this as a challenge, it’s actually an opportunity for another player to come in as we have a very good pool of players,’ added Senong.

They have already been replaced by Saluleko Mathonsi (Wits University) and Tristan Nikitaridis (University of Johannesburg) – bringing the squad to 27 players in total.

Amajita leave for Mozambique on Thursday and will return to South Africa on Sunday.

The AFCON tournament will take place in Niger from 24 February to 10 March 2019.

Eight nations will participate in the competition – and the top four countries will qualify as African representatives for the 2019 FIFA U20 tournament to be held in Poland. 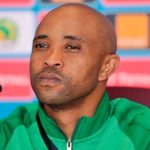 Amajita coach off to Under-20 World Cup draw