Two-time Olympic triathlete Kate Roberts has officially called it quits on a successful 14-year career, writes Mark Etheridge.
The Bloemfontein-born three-phase ace represented Team South Africa at the 2004 and 2008 Olympics as well as the 2006 and 2014 Commonwealth Games and numerous world championship events.
Once ranked as the world’s seventh best women’s triathlete, won a silver medal in the team event for South Africa at the Commonwealth Games in Glasgow, earlier this year.
‘To be honest my retirement has been brewing for a long time now and I have realised that to carry on pursuing triathlon at ITU [International Triathlon Union] level requires 100% dedication and motivation and that my heart is not directly in it like it used to be,’ 31-year-old Roberts told Road to Rio 2016.
‘It has also been a funding issue and unfortunately I don’t have the financial backing that is required to get to another Olympics. I also feel I desperately want more balance in my life now and since I have been home, I also realise there is a desperate need to develop the future of triathlon in South Africa, and if no one does this then the sport will have no more Olympians.
‘So there are a number of reasons but I am happy with my decision and know it is the right one.’
The good news is that Roberts’ invaluable experience will not be lost on the next generation and the Pretoria based athlete will be ploughing back her invaluable knowledge gained on the global circuit.
She wrote on her website blog: ‘My goals for the future are to still remain in the sport and I am aim to start and run an Elite Junior Triathlon academy at the High Performance Centre in Pretoria.
‘This will be my way of giving back to the wonderful sport by developing future South African triathletes. I will endeavour to put the same energy, passion and commitment that I did into my professional triathlon career into my new venture. I will pass on all the many lessons and experiences I’ve learnt along my way and invest them into future triathlon stars.
‘My athletes will be between the ages of 13-20 and I will dedicate hands-on training sessions to them six days a week. I hope to be working with about 15 athletes, enabling me to give them 100% engagement and support, in order for them to be the best triathletes that they can be.’
She’ll work closely with national triathlon coach Lindsey Parry in Pretoria, alongside Team Jeep’s Max Cluer.
‘Very few people have the opportunity to spend 14 years of their life doing something that they truly love and upon reflection I can honestly say that I have been blessed with a greater career than I could ever have imagined. From an early age of nine years old, I had a clear dream to represent South Africa at an Olympics and I can proudly say that I made the most of the opportunities available to me and I gave absolutely everything to live this dream.
‘As an athlete and proud South African, the feeling of wearing my country’s colours was truly an amazing feeling and I will forever be proud to remember it.
‘My triathlon career certainly came with many highs and just as many lows but I believe that I always needed to fail in order to succeed and experience feeling truly satisfied when things did come together for an outstanding race. Being a professional triathlete certainly has defined me and made me who I am today but it is an end of an era and I am excited to be on a new and different journey. ‘
Roberts also took time out to thank those who were behind her success. ‘Firstly, I must thank my family. My parents, brother Gareth and twin sister Tessa for their encouragement and support throughout the years and for the example that they set for me. They taught me that all the hard work and sacrifices are worth it in the long run. I give thanks to all my past coaches. Simon Gray, my swimming coach from the age of nine, who instilled in me the discipline and work ethic to reach the levels that I did in my triathlon career. My running coaches JP Botha and DB Prinsloo, who made me love running so much. My triathlon coaches Libby Burrell who helped me reach my first Olympics in 2008 and Dr Darren Smith who worked with me from 2009 to 2013 and taught me all about the necessary sacrifices, dedication and what it took to be the best triathlete that I could be.
‘To Lindsey Parry and Wayne Riddin who helped me this past year in Pretoria and made my Commonwealth silver medal possible. Thank you for all playing your part in making my journey happen, I feel honoured to have worked under your guidance. And lastly to all of the wonderful life-long friends that I have made along the way, I thank you so much for your friendship, love and support.’ 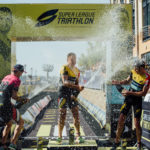 SA’s Murray stays in the mix at Super League Jersey

Schoeman ready to race at African Championships in Zim

Tokyo looms, again, We don’t know for sure in what shape of form the Olympics and Paralympics will take place in July to September and if anything 2020 taught us to take nothing for granted. What we do know is that if Tokyo 2020 +1 does go ahead, it will do so against a new-found back drop where simply taking… END_OF_DOCUMENT_TOKEN_TO_BE_REPLACED