Frustrated? Things getting to you? Consider the fact that 17-year-old Christian de Klerk (Tuks), who will be representing South Africa next week at a World Cup competition in Turkey, is a firm believer that nothing clears one’s head better than shooting a few arrows.

‘I can vouch for it. When I’ve had a difficult day at school and feel a bit despondent, all I have to do is go and shoot a few arrows. It relaxes me to such an extent that I can face up to any challenge afterwards,’ said De Klerk who is in matric at Hoërskool Waterkloof.

A Paralympian archer at Tuks, Shaun Anderson, has no hesitation in saying that De Klerk is a champion in the making. At last year’s Junior World Championships in Argentina, De Klerk finished ninth in the compound category.

There are two categories in archery: recurve – the Olympic format – and compound.

Recurve bows are the simpler of the two types, featuring between one and three pieces that make up the frame, and a single string. Though not a prerequisite, many recurve bows are made from wood. They also feature a single string that’s much shorter than the string used in a compound bow.

Compound bows are the modern cousin of the recurve and have become very popular in recent decades, both for hunting and shooting. Compounds use a pulley system that takes the strain off the bow and provides slack for the archer, making it easier to shoot with accuracy.

De Klerk had to average a score of 697 out of 720 to qualify for the selection trials for the team competing in Turkey. His best score so far is 705.

According to the Tuks archer, his sport requires the utmost concentration. ‘I would say it is 90% mental as you got to do the exact same thing 72 times during a competition. It requires you to be focused entirely each time you shoot an arrow. The only time you can relax slightly is when the arrow leaves the bow, but that’s only for as long as it takes to pick up the next arrow. So you are in the zone all the time.

‘There’s nothing special to my training. I believe it’s important to be shooting fit. You can’t just pick up a bow after two months and expect to hit the bull. To be able to shoot good scores consistently means you have got to train every time as though you are competing.’

Patrick Roux, Danelle Wentzel, Agnita Worst and Reuben Brent-Meek are the other Tuks archers who will be competing in Turkey. 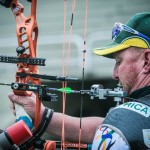 Anderson’s amazing Paralympic experience has him hungry for more

New rules under spotlight in Pretoria

Tokyo looms, again, We don’t know for sure in what shape of form the Olympics and Paralympics will take place in July to September and if anything 2020 taught us to take nothing for granted. What we do know is that if Tokyo 2020 +1 does go ahead, it will do so against a new-found back drop where simply taking… END_OF_DOCUMENT_TOKEN_TO_BE_REPLACED