Up and coming javelin athlete Ulrich Damon has been given the go-ahead to start training again after ankle surgery and soon hopes to make an impact on the national rankings.

Damon, who turned 20 in October, has a personal best of 78.58 metres, thrown in Potchefstroom last year, a throw that puts him third best of all the South African Under-20 javelin exponents to date and third best in all age-groups last year but he is first to realise that the road back to that achievement won’t be plain sailing.

“I went for my follow-up yesterday and have got the all-clear to throw again. I still need a few follow-ups with the biokineticist but at least I can compete. But I’ll take it slowly that’s for sure,’ said the second year Behavioural Science student at Potchefstroom University.

“My problem was diagnosed as a posterior ankle impingement (my left ankle) but hopefully the operation has sorted that out. The problems started in June and after the African Championships in Kenya we started doing tests and scans etc and since then I’ve been out of competition.’

Damon hails from Cloetesville, Stellenbosch and the local athletics hotspot of Coetzenburg may well see his return during the upcoming Yellow Pages series in December.

“I don’t want to rush it but it could definitely be at one of the four meetings. If I could at least throw 75m by the end of the year I’ll be happy but next year I want to try and qualify for the World Championships in Daegu, Korea but that will mean I’ll have to throw 80m to qualify.” 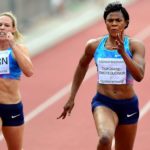 Horn’s SA record time gone with the wind in France

Tokyo looms, again, We don’t know for sure in what shape of form the Olympics and Paralympics will take place in July to September and if anything 2020 taught us to take nothing for granted. What we do know is that if Tokyo 2020 +1 does go ahead, it will do so against a new-found back drop where simply taking… END_OF_DOCUMENT_TOKEN_TO_BE_REPLACED