South Africa’s women’s hockey coach Jenny King has made an impassioned plea to SASCOC: Please don’t scupper our chances of going to London 2012 just because we won’t win a medal.

SASCOC president, Gideon Sam, when announcing a R400-million injection on the Road to London, alluded that the focus was on excellence. ÔÇ£We want 12 (medals) in 12 (2012),ÔÇØ he said, ÔÇ£and we want ÔÇ£excellenceÔÇØ. He added that ÔÇ£team sports would have to be medal candidatesÔÇØ.

King, who oversaw a 3-0 series defeat against third-ranked Germany in Stellenbosch last month, however, feels that if that’s the benchmark then women’s hockey would not be going to London. And she argued it would be detrimental to the sport.

ÔÇ£I can tell you now that we won’t be a realistic medal hope in London, but you only really don’t have a chance when you are not there. It will be good for hockey if we can go to London, but if we don’t, there will be far-reaching consequences so I hope it doesn’t get to that,ÔÇØ King said.

ÔÇ£The average age of this team is 20 and they’ve got so much potential. Top nations have a high respect for South African hockey and I just wish we can be a given a chance. I understand the financial implications, but we will lose so much if selection is based on medals only.ÔÇØ

King admitted that, ÔÇ£we need to get used to winning on the big stage and it’s all about learning to win really. It could all come together after that.ÔÇØ 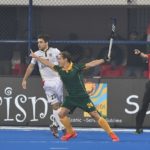 Under-21 hockey girls fight back to draw against China