Earning his second medal of the competition, after a silver medal in the time trial on Thursday, Pieter ‘Supapiet’ du Preez took the race to Swiss rider Benjamin Fruh to secure the first gold medal for Team South Africa.

The actuarial analyst for Deloitte calculated his 30.4-kilometre H1 handcycle race to perfection, winning in a time of 1hr 22min 29sec, 45 seconds clear of Benjamin Fruh from Switzerland. Italian Fabrizio Cornegliani rounded out the podium for a bronze medal.

Racing five laps of the 6.07-kilometre circuit, Du Preez had four laps to set the tone of his proposed attack, before nailing the sequence on the fifth and final lap. That was how his race unfolded. ‘The last hill on the course is steep, but even steeper up the last 100 metres. Ben would pass me, and then I worked at the top to pass him and then relaxed on the downhill.

‘On the last lap, the wind came up a little and I let him pass and do the work up the climb against the wind, and then I dropped him. I heard him switch gears behind me, so I thought he is probably going to think that I’m going to relax on the downhill.

‘When I got to the top, I just hammered it and I don’t think that he could catch me. He sits a little more upright than me on the bike, so I knew that if I hammered it I would maybe hold the gap. My rear-view mirror is on the right side, so I couldn’t see him and I didn’t really know where he was. I couldn’t hear him either because my wheels make a noise on the road, so I just kept on hammering.

‘That’s why I just killed myself until I was over the line. Ten metres from the line I knew that he wouldn’t pass me, so I took my hands out and raised them in the air to celebrate.’

The proudly South African para-cyclist, wheelchair racer and triathlete felt the pressure of the big moment today. ‘I’ve never put so much pressure on myself. Maybe because it is home soil, but I really wanted to defend my title and jersey from 2015.

‘And in fact, I haven’t lost a road race in UCI World Cups and UCI World Championships since 2014, so I am unbeaten in a road race since then. I am really happy and relieved,’ he said.

One of the many athletes to make it two from two in the 2017 UCI Para-cycling World Championships this year was Christiane Reppe from Germany, who completed the women’s H4 42.5km race in a time of 1:29:16 in a closely matched contest, winning the sprint against her friend Svetlana Moshkovich from Russia by just two seconds. Swiss competitor Sandra Graf finished third, 18-seconds off the winning time.

‘Yeah, it was a really good race, we pushed hard on the uphills and at the end it was quite hard, but it has to be like that – racing is not easy,’ she said, laughing. ‘But it was fun, my class was trying to stay together and on the last uphill I really wanted to push with Svetlana and we managed to break away together. I was slightly stronger on the sprint to take the win. We both have the same coach, and she got silver, so I’m very happy for both of us.’

Speaking about her two UCI World Championships titles, she said: ‘It’s crazy to be double UCI world champion. I’ve never experienced that before. I think it will only hit home on the podium – the anthem plays and I’ll get goose bumps, and it is all very special and really amazing.’

Germany’s second gold medal of the morning came from Andrea Eskau when she won the H5 race over 42.5km in 1:18:05. She beat the two Dutch riders, Laura de Vaan and Jennette Jansen, who both clocked 1:24:09 to secure silver and bronze medals respectively for The Netherlands.

Eskau said: ‘This is the first time that I’ve won both titles, and my previous wins have been sprint finishes. I got away on the first lap and it was very difficult to stay in front all of the time and to push hard throughout the whole race. But I was prepared for that so that I could win again. And then on the finish line, when you’re know you’re alone, it’s great to be able to celebrate a lot more because you’re not in a sprint.’

Dutch powerhouse Jetze Plat has had a phenomenal road world championships this year, and is elated at securing the double gold. Plat has been racing since the age of 12, and the UCI World Championships titles are a dream that he has been working towards for many years. At 26 years of age, this is his sixth road world championships, and the first time that he has won the world titles, and not just one, but two! ‘I will certainly enjoy the jersey for the whole season,’ he said.

Plat’s victory was a tight tussle against Rafal Wilk of Poland in the H4 class, who he worked together with to get the break on the bunch during the race. Plat had to work to his own strength to ensure that he held the lead in the sprint, which is where he thought he would take the win. His victory margin was two seconds over Wilk, while Bernd Jeffre (GER) finished third.

‘I felt incredibly strong in the time trial and I knew then that I was in good shape against the rest of the field. But then, it’s also difficult because all of the guys are watching me now to see what I am doing. The first six laps were really technical, with lots of attacks, but nobody really wanting to work. Two-and-a-half laps before finish, I attacked at the back of course.

‘Only Rafa was with me and I needed him because we worked really well together. We both kept pushing to make sure that they never came back to us. Rafa is strong on the uphill, but I know that I am stronger in the sprint normally. My arms felt strong,’ he said.

The championships end on Sunday. 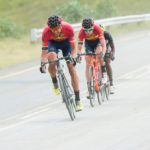 Davids doubles up in Summer Series

By GARY LEMKE in Tokyo On the third day of staying in the Paralympic village bubble “it” finally dawned on me. “It” wasn’t the sheer visual aspect of the 4 000-plus Paralympians with disabilities all in the same environment of towering 17-storey apartments and surrounded by a 4km perimeter fence. Admittedly, that is the initial and most common conclusion of… END_OF_DOCUMENT_TOKEN_TO_BE_REPLACED