Claude Eksteen will be spending his preparation for the 2010 season at home in Durban, a far cry from 2009 when he spent months in Australia preparing for the 2009 season.

ÔÇ£I learned a lot last year by training in Australia, unfortunately it is a very expensive exercise. So this year I will be getting ready for the season back home,ÔÇØ said Eksteen.

The 32-year-old is making full use of the knowledge and expertise of High Performance Manager, Emma Swanwick. ÔÇ£After the testing early in January at the High Performance Centre (at the University of Pretoria grounds) I have spoken a few times to Emma and will be trying to come and see her regularly for advice.ÔÇØ

Good news for Eksteen is that Swanwick, along with Lindsey Parry and Richard Woolrich will be traveling the country for the next battery of tests in April, saving him the trip from Durban to Pretoria.

Eksteen’s first major race of the season will be the South African Championships in Germiston on 21 March. ÔÇ£I will be racing in the Johannesburg Tri Series, the first one being on the 7 February as well as the KwaZulu-Natal Championships, then the SA Championships will be my first mini peak of the year ÔÇô basically the end of my strength training phase.ÔÇØ

Eksteen will use the opportunity of the Johannesburg Tri to spend some time with Swanwick.

After the SA Championships, Eksteen will continue his preparations for the ITU World Championship Series at home before racing on 8 May in Seoul, Korea in the second race of the Series. ÔÇ£After that I will be based in Europe again to do the rest of the Series races. I also want to do the World Cup (different to the World Championship Series) in Des Moines (US) in June. My goal is to finish the year in the top ten ITU final rankings.ÔÇØ

To stay in shape and help with cash flow between ITU World Championship Series races, Eksteen will again be competing in the Bundesliga races as well as a few in the French League.

Unlike Eksteen, another of our top triathletes, Kate Roberts will again head Down Under for her preparations.

She first tried the experiment of preparing for the annual international season in 2009. ÔÇ£For me it was a good experience, so I decided to do it again this year.ÔÇØ

She has been in Canberra since 16 December (not the Gold Coast as in 2009) and is presently in a base phase of training. ÔÇ£My coach Dr Darren Smith changed the training location this year due to his wife Dr Liz Broad getting a job as a dietician at the AIS (Australian Institute of Sport)ÔÇØ

ÔÇ£Canberra is a fantastic place for training, so well for running and cycling and reminds me of Bloemfontein in a way, so I feel very much at home. The past three weeks the Australian national triathlon team has been training out here too on a national training camp, so it has been great to catch up with them on a few training sessions and social outings.

“We also bumped into Cadel Evans (cyclist) the other day on a long ride, so it really is the hub for sport in Aussie.ÔÇØ

Kate is training with a strong group of triathletes from around the world, including Lisa Norden (the world’s second ranked triathlete) from Sweden, America’s Sarah Grof (one of the best swimmers/cyclists on the world triathlon circuit, current world duathlon champion Vendula Frintova, Barbara Riveros from Chile and one of the best runners on the world circuit. Vicky Holland ÔÇô from Great Britain (fourth last year at the World Under-23 Championships), Hungary’s Zita Szabo and Jenna Shoemaker from America.

The group then plans to travel to Europe from the beginning of June until after the Final of the World Championships Series in Budapest on the 11 September. Just as in 2009 the group will be based in Davos again at.

ÔÇ£From Davos I will race a full European Summer of World Championships Series races, World Cups, French Grand Prix races as well as the London Triathlon,” said Roberts. “Then I will be home just in time for my twin sister’s wedding on 25 September and after that I will prepare myself for local racing in SA during our summer months. It’s a busy year ahead but I am super excited about the year and hoping to have a break through year. However I am really positive that things will go well this year.ÔÇØ 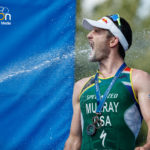 Kate’s on the comeback

By GARY LEMKE in Tokyo On the third day of staying in the Paralympic village bubble “it” finally dawned on me. “It” wasn’t the sheer visual aspect of the 4 000-plus Paralympians with disabilities all in the same environment of towering 17-storey apartments and surrounded by a 4km perimeter fence. Admittedly, that is the initial and most common conclusion of… END_OF_DOCUMENT_TOKEN_TO_BE_REPLACED