Mountain bikers Mariske Strauss and Cherie Redecker are back home in South Africa after racing another UCI MTB World Cup event in Granichen, Switzerland at the weekend.
This was the last of three World Cups raced by the duo. Strauss ended 18th in a time of 1hr 33min 26sec and Redecker 22nd (1:37:14) in a race won by home town rider Jolanda Neff (1:22:18).
Said Stellenbosch’s Strauss: ‘It was quite the race… I started great but then legs just weren’t available and I think the travelling is taking a bit of a toll.
‘I came through in 11th position in the first lap and then just popped and kept making silly mistakes. It was crazy wet and slippery as well so the tyres weren’t quite the right choice but I’m still happy with how the first lap went,’ she told Road to Rio 2016.
‘Now i think I just need a proper physiotherapy session, a little recovery and then we build up for the next one, super excited for the next round.’
As for Redecker, pictured above showing off the muddy race conditions: ‘Race day started off chaotic and we knew we were in for a muddy ride seeing the aftermath of the junior men’s race. It was a fight from the get-go.
‘I had an average start but was determined to improve my position. But every time I started closing the gap I made a mistake or just misjudged the terrain and slipped on a route. Going onto the fourth lap I felt completely drained and had no fighting power to catch anyone. Due to the muddy conditions my chain slipped off a few times and I’d lost motivation.
But to my surprise I didn’t get pulled off and finished all the laps. Despite the bad race it was an improvement compared to the last time I raced in Gränichen.
‘Next race is a local race in Bloemfontein, the last of the SA XCO Cups.’
In the elite men’s race in Granichen, South Africans Stuart Marais and Jan Withaar were 37th and 40th respectively as Swiss riders filled the first 11 positions. 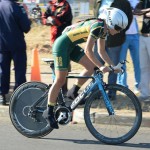 Young Benson slips up at World Champs in Spain

Tokyo looms, again, We don’t know for sure in what shape of form the Olympics and Paralympics will take place in July to September and if anything 2020 taught us to take nothing for granted. What we do know is that if Tokyo 2020 +1 does go ahead, it will do so against a new-found back drop where simply taking… END_OF_DOCUMENT_TOKEN_TO_BE_REPLACED