Different venue, same resultÔÇª that was the story for Erhard Wolfaardt and Andrea Steyn as the two won their second and third BSG Energade triathlon series race on the trot in Potchefstroom on Sunday.

Winners in Hartebeespoort the previous week, the two aces carried their form over to the third leg of the popular series.

Wolfaardt has now won the last two legs of the series after Richard Murray took honors in the first leg at Roodeplaat Dam near Pretoria two weeks ago. And Pretoria’s Steyn is yet to be beaten in the series.

Crowned All Africa Games champion in Maputo, Mozambique last month, Wolfaardt is going from strength to strength and won Sunday’s race of a 600-metre swim, 20km bike and 5km run in 55min 12sec, 35 seconds clear of Theo Blignaut with Claude Eksteen a further 18 seconds down.

The Mr Price athlete needed no extra motivation to shine on Sunday. “Potchefstroom is my hometown, so I really wanted to take the win today in front of all my supporters,” Wolfaardt told Road to London 2012.

“The swim was very different today with everyone trying to navigate through the underwater grass, but nonetheless I made sure I was settled in with the front few guys. This meant I could make the front pack on the bike easily so that I can set myself up for a fast final 5km run. Unfortunately Richard Murray punctured midway through the bike, which meant my main competition today was out. Knowing my running legs at the moment, and the rest of my competitors I knew all I had to do was to make it safely to the end of the ride.

“Once on the run I quickly opened a gap on the rest of the field and just maintained a steady pace until the end. As always I am very happy with today’s win, and also my girlfriend [Rosalyn Laurens] who ended up third in the Elite Ladies. Well done to the rest of the guys, and a big thumbs up to BSG for another great event.”

Steyn, second at All Africa Games, where she was still finding her feet again after a lengthy injury break, clocked 62:52 for her win.

It was Wolfaardt’s ability to run that saw him win on Sunday, writes Manfred Seidler, with the quickest run leg of 15:16 for the 5km. This after Wolfaardt, Blignaut, Claude Eksteen, Chris Felgate, Rudolf Naude and Pieter van der Mescht were all out the water chasing Henri Schoeman and Jeff Norton. Schoeman needed only 7:32 for the 600m swim and Norton 7:49, the chasers coming out of the swim in times ranging from 8min to 8:09.

But on the bike and run it became business as usual as the main protagonists took control. It came down to the run and Wolfaardt showed why he is in control with the fastest run split.

Steyn is also back to her winning ways. She had 32 seconds on runner Carlyn Fischer, the All Africa Games champion.

A week prior she had almost two minutes on Laurens, showing that the once indomitable Steyn is coming back to the form that saw her be virtually unbeatable a couple of seasons ago. The series moves to Midmar on 30 October. 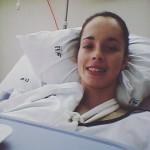 African champion recovering after bad bike crash in US