Many paddlers will be eyeing personal milestones at the 2018 FNB Dusi Canoe Marathon, but very few as significant as Lorna Oliver who eyes her 30th consecutive Dusi finish at next month’s event.

The daughter of long-serving KwaZulu-Natal Canoe Union stalwart timekeeper and administrator John Oliver, Lorna’s first taste of the Dusi was when she was just 13 years old.

‘My dad asked me to do the Dusi with him when I was in Standard 5 (Grade 7),’ she recalls. ‘I don’t really remember my first one too well which is a bit of a shame but I do remember getting to Burma Road and wondering what all the fuss was about!

‘I guess at 13 years old you think that you can conquer the world!’  Being someone that grew up around paddling it was almost a given that Oliver would become a paddler herself, however her love affair with the Dusi Canoe Marathon has defied all expectations and she plans on continuing as long as possible.

‘I did five in a row, then 10 and then 15 and I thought that I just had to carry on! ‘My partners over the years have come to realise that even if I break a leg, they’re going to have to carry me across the finish line!’ she mentioned in jest.

The 29 previous Dusi Marathons have all had their own unique memories; however there are a few that really stick out for her.

‘My first K1 Dusi in 1991 when the river was in flood was definitely a race that I won’t forget. My dad was taking a school boy down and they were with me the whole way.

‘Then I remember the year when there was massive rain overnight after day two and the river was also flooded and we had wrapped our boat on the first day! ‘Luckily we managed to nurse it all the way to the finish that year,’ she reminisced.

Preparing for the Dusi is very much a personal thing and despite Oliver’s 29 Dusi finishes she doesn’t follow a specific routine when getting ready for the three-day slog from Pietermaritzburg to Durban.

‘Some years I do more and some years I don’t do any training at all!’ she laughed. ‘This year my partner and I have been training quite hard and I am just trying to hang in there with her!

‘We are taking it quite seriously and are hoping that we can win the Sub-vet’s category. It’s always a lot better being closer to the front of the field than the back because you’re not out on the water in the heat so we are training hard.’

In the last 29 years one might think that Oliver has seen it all in the Valley of a Thousand Hills, but the one element that keeps her returning is the uniqueness of every Dusi that she has done.

‘Every year the Dusi is different, from water levels to rapids to weather conditions and that is why I love it.

‘You can go to the Fish and basically know what to expect every year but with the Dusi there are always new challenges every year,’ she explained.

The 2018 women’s tussle at the Dusi is going to be an exciting one with a number of crews working hard to claim a maiden Dusi crown. Having such strong competition in the women’s field is something that Oliver is satisfied to see.  ’It’s fantastic to have this kind of competition in the women’s race this year. There are about eight to 10 boats that will be fighting it out for the top three which is really exciting and I hope that we can push this interest through to other disciplines.’

Conquering the toughest canoeing race in the country 30 times will put Oliver in some hugely elite company; however she hopes that she can inspire other women to continue to take part in the Dusi and paddling.

‘I have never thought about it but it would be great if I could inspire women to get out and paddle the Dusi. I just want ladies to get out there and take part. Grab a partner and get in a boat!’ she added positively. 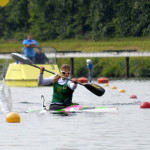 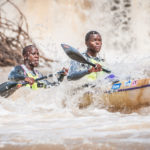