A Times of India report says the false ceiling fell directly over the field of play.

Team South Africa have three weightlifters set to compete at the Games which are scheduled to take place between 3-14 October.

On Tuesday, a gleaming new steel-and-concrete suspension pedestrian overbridge came crashing down at the Jawahar Lal Nehru Stadium. The disaster left at least 27 workers injured and heightened concerns about the safety of structures being readied in a mad rush for the October 3 opening. Among the injured, five of them seriously, was a site engineer.

Public works minister Raj Kumar Chauhan told reporters the bridge, linking the stadium’s parking lot to the venue, was meant exclusively for athletes and officials, underlying the lack of attention to facilities tom-tommed as world-class. But later in the day, as fears over safety grew, Delhi chief minister Sheila Dikshit, while visiting the injured, tried to play it down insensitively by saying the overbridge was meant for ordinary spectators. 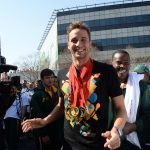 Netballers shine ahead of India

By GARY LEMKE in Tokyo On the third day of staying in the Paralympic village bubble “it” finally dawned on me. “It” wasn’t the sheer visual aspect of the 4 000-plus Paralympians with disabilities all in the same environment of towering 17-storey apartments and surrounded by a 4km perimeter fence. Admittedly, that is the initial and most common conclusion of… END_OF_DOCUMENT_TOKEN_TO_BE_REPLACED