Running an IAAF meeting in Ghent, the Potchefstroom athlete ended fourth in a time of 7min 39.55sec.

That time not only smashed his own record of (7:45.45) that he set in Mondeville, France last week, it was also quicker than Juan van Deventer’s outdoor record of 7:41.06.

“I went into the race very relaxed,” Gelant told Road to Rio 2016 on Monday morning. “Leading up to the race I knew I had it in me to go 7.40. From the start I felt good and just stuck with the three Kenyans and the Moroccan

“It was a much-needed experience going forward to World Indoors in Poland next month and my goal there, would realistically be to place in the top six. I’m very positive and looking forward to a great indoor championships.”

Added an elated coach, Jean Verster: “It seems Elroy could even have gone faster if the pace was faster earlier on. Generally indoor times are aroudn five to seven seconds slower than outdoor so hopefully this will be the start of some fast outdoor times this year as well.”

At the last World Indoor Championships in Istanbul, Turkey two years ago, Gelant made the final of the 3000m and ended 12th.

“Outdoors he’ll like to run closer to 13min for 5000m and a few fast 1500 and 3000m as well. He’ll also run a few 10,000m this season but we want to focus on not racing too much, and peaking at the right time. the two peaks would be March (indoors) and then August again (outdoors),” concluded Verster. 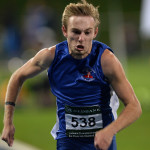 END_OF_DOCUMENT_TOKEN_TO_BE_REPLACED

By GARY LEMKE in Tokyo On the third day of staying in the Paralympic village bubble “it” finally dawned on me. “It” wasn’t the sheer visual aspect of the 4 000-plus Paralympians with disabilities all in the same environment of towering 17-storey apartments and surrounded by a 4km perimeter fence. Admittedly, that is the initial and most common conclusion of… END_OF_DOCUMENT_TOKEN_TO_BE_REPLACED