Unlike his female counterpart, Ricardo Fitzpatrick was unable to bring home a medal from the IPC Powerlifting World Cup in Rio de Janeiro… but the disappointment has simply made him even more determined to bounce back.
The 35-year-old from Kimberley was competing in the Under-80kg division and hoping to be able to emulate or even better the feat of fellow Northern Cape lifter Chantelle Stierman who won bronze in the 61kg category.
But Fitzpatrick’s hopes of glory were laid low as he failed to make any of his lifts, being disqualified on a technicality early on.
‘No, things just didn’t go to play and I bombed out,’ the network controller for the Office of the Premier told Road to Rio 2016 on his return from South America. ‘I’m truly sorry for the disappointment but what it does show is that I know what to work on and will make it up in Dubai in two weeks time.’
That competition is the 2016 Fazza Powerlifting World Cup.
Elaborating on the competition, won by Colombo’s Jainier Rafael Cantillo Guette with a best of 195kg, Fitzpatrick said: ‘My plan was to open light on 170g to get into the comp and then chase for the bronze medal from there on because the lifter from America, Amhed Shafik, opened with a 172kg. My plan was to end off with 185kg to take bronze and to break the SA record which was standing on 165kg.
‘My disqualification was technical… your bench press has to be near perfect and you must have a clean extension of the arms to complete the lift. I just went out slightly on my left arm and was failed. According to my second lift it went smoothly, that’s how our travelling coach Andre Ludik saw it.
‘I’ve already done 190kg in the gym with competition rules…’
But for now it’s moving on from Rio and over to Dubai. ‘The Dubai comp will be bigger and the current Paralympic and world champions will be there. I’ll just work on my weak points to do more floor bench press to work on event lockouts.’ 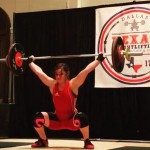 More honours for Mona as she takes gold in Texas

Tokyo looms, again, We don’t know for sure in what shape of form the Olympics and Paralympics will take place in July to September and if anything 2020 taught us to take nothing for granted. What we do know is that if Tokyo 2020 +1 does go ahead, it will do so against a new-found back drop where simply taking… END_OF_DOCUMENT_TOKEN_TO_BE_REPLACED