Central Gauteng’s Amilkar Bhana laid down an early marker for success in the first Nomads SA Boys Championship (Under-15) of the season in very windy conditions in George on Monday.

The 13-year-old Country Club Johannesburg junior carded an opening one-over-par 73 at Kingswood Golf Estate to finish within striking distance of the round pacesetter Herman du Plessis.

Du Plessis got his nose in front early on with birdies at the first, third and fifth holes.

The Eagle Canyon golfer cancelled a bogey at the ninth with another gain at the 10th and, despite dropping further shots at 12 and 16, he finished top of the pile with a one-under 71.

Bhana negated back-to-back bogeys at the seventh and eighth holes with a pair of birdies at 10 and 11 to get within a shot of Du Plessis, but spoiled a run of straight pars from the par-three 12th with a bogey finish at the par-three closing hole.

The three-club wind got the better of Rorisang Nkosi on the back nine, but the North West junior racked up a trio of birdies from the seventh to shave three shots off his five-stroke deficit and finished on two over. The Pecanwood golfer shares third with former Gowrie SA U-15 champion Casey Jarvis from Ekurhuleni and Malan Potgieter from the Eastern Province.

Nash de Klerk from Ekurhuleni also played himself into the mix again in George. Last year’s Dimension Data U-15 Challenge winner at Fancourt eagled the par-five seventh and he also reeled in a pair of birdies on his way to an opening 76.

Picture of Bhana courtesy of GolfRSA 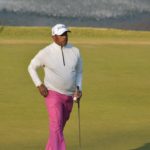 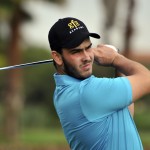 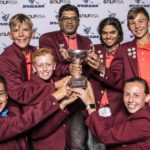 Gauteng fight back against North West in PE

Tokyo looms, again, We don’t know for sure in what shape of form the Olympics and Paralympics will take place in July to September and if anything 2020 taught us to take nothing for granted. What we do know is that if Tokyo 2020 +1 does go ahead, it will do so against a new-found back drop where simply taking… END_OF_DOCUMENT_TOKEN_TO_BE_REPLACED