Mabulu and Ngoma, amongst others, are practising Judo at the PE residential programme run at PE Army base in collaboration with the Nelson Mandela Metro University for scientific support with a Polish residential international coach, Mr Andrej Blady.

Mabulu and Ngoma were developed by a local judo coach Mr Enoch Screech who has produced, amongst others, many black judo national champions.

Van Zyl and Trezise are based at the Tuks HPC in Pretoria under Bulgarian international coach, Nikola Fillipov. 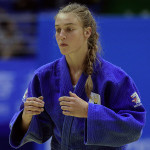 Judoka fight it out for Commonwealth places