Le Clos added the 50m butterfly silver medal finishing second behind Brazilian Nicholas Santos, who won the sprint event in 22.08 just 0.01secs ahead of the South African. Compatriot Ryan Coetzee finished the race in seventh with a time of 22.99.

Russian flyer Vladimir Morozov won the race in 20.69 with Pieroni finishing third in a time of 21.34.

Tandy was also a part of the mixed 4×50m freestyle relay quartet which included Douglas Erasmus, Tayla Lovemore and Catherine Royden-Turner that finishing fourth in a time of 1:34.29.

Lovemore also featured in the women’s 100m butterfly final where she finished fifth in a time of 57.41 with Sweden’s Sarah Sjostrom winning the race in 54.91.

The FINA Swimming World Cup will continue in Budapest, Hungary, starting on Thursday and ending on Saturday. 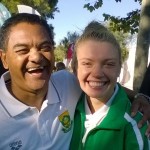