Competing in the Laser Radial class, Gibbs finished in fourth place, level on points with third-placed Guido Gallinaro, from Italy and only just missed out on the bronze medal on countback.

Before that Gareth Blankenberg won a Youth World title almost 20 years ago.

Gibbs fought hard all the way, finishing off in style with a win in the last of the nine races.

Speaking from China, the talented young sailor said: ‘I think it’s gone really well. I’m very happy. This is my first Youth Worlds and I’ve done really well. Losing a tie-breaker to third place is a little bit disappointing but it is how it is and that’s just how the rocks fall.

Speaking about the conditions in China, the Wynberg Boys’ High student added: ‘The lightest we had was about six knots but it was usually between eight and 12 which is amazing – perfect conditions. I really enjoyed the event.

‘I felt good the whole regatta. The second race where I got a 22nd, I made quite a big mistake and that’s what caused me to go really deep. I don’t want to say if I had done things differently I would have gotten a medal – it was great and I just put my head down and worked hard so I’m happy.’

Also happy was Gibbs’s proud father, Damian, who admitted: ‘The last couple of days have been a real emotional roller-coaster. At times he was second, then fifth, then third, then fourth. I knew he would finish strong, it’s almost his trademark, and seeing him finish first in the last race and by almost a full leg was just the best.

‘We didn’t communicate much during the event as he let me know that he was “going to be in the zone” and not up to chatting much. I felt comfortable with this as he had been working a lot with Roger [Hudson] and they get on really well.’

Two-time Olympian Roger Hudson served as coach for the young team of six South Africans competing in China and played an integral part of their training leading up to the event.

‘It has been amazing working with Roger Hudson and the RaceAhead team who have been instrumental in mentoring Calvin over the last 18 months. The multiple layers to the coaching have been staggering, and the optimised use of time, athletes, and resources has been really fantastic,’ said Gibbs senior.

‘This result is an amazing way to finish off his youth sailing career and a perfect way to launch into being an adult sailing athlete,’ he added of his son, who has just finished matric. ‘I feel that this Youth World Sailing Champs campaign has brought the best out of all the young sailors and we have a good base to build on for the next few world events.’

The rest of the SA team also put up a good fight. Michaela Robinson and Elsje Dijkstra finished 17th in the girls’ 420 class, Sonja Stock was 26th in the girls’ Laser Radial, and Benji Daniel and Rivaldo Arendse finished 22nd in the boys’ 420 class.

That meant the South African team finished 27th out of 60 countries in the Nations Trophy, which was won by Italy.

In a nail-biting contest in the Dabchick class, with one point in it heading into the final race, it was Campbell Tiley who took top honours, with James Hellstrom taking the Laser Radial title. These results will go a long way in catching national selectors’ eyes ahead of the next Youth World Championships in the USA in 2018. 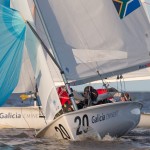 SA 470 due in third after three races in Argentina

Tokyo looms, again, We don’t know for sure in what shape of form the Olympics and Paralympics will take place in July to September and if anything 2020 taught us to take nothing for granted. What we do know is that if Tokyo 2020 +1 does go ahead, it will do so against a new-found back drop where simply taking… END_OF_DOCUMENT_TOKEN_TO_BE_REPLACED