The cream of South Africa’s junior tennis talent travel to Stellenbosch next week for the 2010 The Nike Junior Tour Masters. The tournament will be played at The Kainos Tennis Academy from 15ÔÇô17 October.

The tournament, the world’s most prestigious and biggest junior tennis initiative is played by 64 000 players from 30 countries around the world. The Nike Junior Tour has been played in South Africa since 1998.

Catering for the Under-12 and Under-14 players, the Nike Junior Tour in South Africa comprises of six tournaments played throughout the year in various centres around the country. The top six players on the year end Nike Junior Tour race automatically qualify for the Stellenbosch showdown with two wild cards per agre group nominated by The South African Tennis Association.

ÔÇ£I have very good memories of South Africa having won two of my three Nike Junior Tour events at Sun City and then being invited as a guest back to South Africa for the NJT International Masters in 2003ÔÇØ said Nadal. ÔÇ£I also was in your country earlier this year to celebrate with my Spanish soccer team winning the Fifa World Cup. On all four occasions that I have been in South Africa, I enjoyed the good weather, beautiful scenery and the warm, friendly people. I even rode on a elephant!ÔÇØ said Nadal.

The tournament is played in a round robin format with cross over semi finals. The eventual winners in the four age-groups will then represent South Africa at the Nike Junior Tour International Masters to be played in December at Club Med Columbus Isle in The Bahamas. 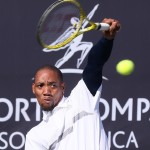 Lucas adds another doubles title to his growing collection

By GARY LEMKE in Tokyo On the third day of staying in the Paralympic village bubble “it” finally dawned on me. “It” wasn’t the sheer visual aspect of the 4 000-plus Paralympians with disabilities all in the same environment of towering 17-storey apartments and surrounded by a 4km perimeter fence. Admittedly, that is the initial and most common conclusion of… END_OF_DOCUMENT_TOKEN_TO_BE_REPLACED