Zaahir Gamiet, Brett Walsh, Neil de Villiers and Heinrich Alberts were in record-breaking form as SA’s junior swim team continued to dominate the medal standings on the fourth day of the 8th African Junior Championships in Mauritius on Saturday.

By the end of the third day’s swim action, SA were leading the medals standings with 36 gold, 21 silver and 17 bronze, with Egypt next best with six gold, 17 silver and 10 bronze.

Competing in the 12 to 14 years age group, Gamiet, a grade 8 pupil at SACS in Cape Town, took his gold medal haul at the African junior showpiece event to a total of seven, in clocking a Championship best of 58.35 secs in the 100 metres butterfly and 25.00 in the 50m freestyle.

He then joined provincial team-mate Matthew Bowers, North West’s Hardus Louw, and Eastern Province’s Akeem Langford, in producing a Championship record time of 3:47.40 in the 4 x 100m freestyle┬á relay in the 12 to 14 years category.

Alberts and Walsh, joined by de Villiers and KwaZulu Natal’s Murray McDougall bettered the Championship record in the 4 x 100m freestyle relay to 3:34.58.

In congratulating the swimmers on their performances, Swimming SA CEO Shaun Adriaanse said: ÔÇ£The excellent performances produced by our young swimmers at the African Junior Championships in Mauritius is a sign of what can be achieved through commitment and hard work, and I have no doubt that these athletes will go on to become role models and household names across all communities of our sports-loving country.ÔÇØ 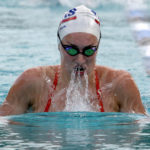 Time is of the essence for Schoenmaker