United States based BMX rider Gavin Lubbe returned to South Africa last week ahead of the UCI BMX Supercross World Cup season opener in Pietermaritzburg on 8-9 April, determined to do his country of birth proud.

Born and raised in Springs on Gauteng’s East Rand, Lubbe and his family crossed the Atlantic in 2004 and after originally setting up home in Atlanta they eventually settled in Monterey, California where they have spent the past five years.

.ÔÇ¿ÔÇ¿ÔÇ£I spoke to my Dad about exploring the possibility of him finding a position in his line of work in the States and then in 2004 an opportunity came his way which we jumped at,ÔÇØ explains Lubbe. ÔÇ£It’s been fantastic being over there but South Africa will definitely always be my home.ÔÇØ

ÔÇ£Over there you have a major race at least once a month where the world’s fastest racers come together and compete so it’s always a great standard,ÔÇØ he added. ÔÇ£To come back to South Africa is always awesome though and to see all my friends who I grew up with and have stayed in contact with over the years is great!ÔÇØ

Having overcome a recent quadricep and femur injury which he picked up whilst racing in Texas, Lubbe is raring to go and eager to contribute to the South African Olympic cause.

ÔÇ£Preparations have been going fairly well and I feel everything is coming together again after my recent injury which I’m very happy about,ÔÇØ said Lubbe.

ÔÇ£I aim to give it my best shot at the Supercross and try score as many points as I can to get South Africa to the Olympics. I was born here and my heart will always be here. I have incredibly fond memories of South Africa and so all that I hope to do is make my country proud!ÔÇØ he added.

ÔÇ£It’s always great having the home crowd behind you, it always gives that extra bit of confidence.ÔÇØ

Two years ago Lubbe returned to South Africa to compete in the 2009 UCI BMX Supercross. However the 21-year-old feels he is far more prepared for what lies ahead this time round.

ÔÇ£I’m definitely more confident this time, especially on the hill. Jumps are jumps and you can get used to those pretty easily but the hill takes a lot of practise and hard work and I feel I’ve done that now,ÔÇØ said Lubbe.

Rising talent and another of South Africa’s Supercross entries Kyle Dodd recently spent three months in the US with Lubbe where he gained invaluable experience. ÔÇ£It was great having Kyle (Dodd) over there training and racing the circuit. He has come along in leaps and bounds over such a short period of time and the sky’s the limit for him in my opinion!ÔÇØ said Lubbe.

ÔÇ£He has a really bright future ahead of him in BMX with many great things to come!ÔÇØ he added.

More information can be found at www.bmxworldcupsa.co.za 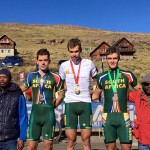 Buys and Strauss crowned continental king and queen in Lesotho

Tokyo looms, again, We don’t know for sure in what shape of form the Olympics and Paralympics will take place in July to September and if anything 2020 taught us to take nothing for granted. What we do know is that if Tokyo 2020 +1 does go ahead, it will do so against a new-found back drop where simply taking… END_OF_DOCUMENT_TOKEN_TO_BE_REPLACED