Thursday’s ‘super brutal’ Queen Stage of the Absa Cape Epic mountain bike race duly delivered a battle royal for supremacy in the men’s category and a gift to women’s leader Annika Langvad on her birthday.

But the drama began even before the starting gun when Team Spurs’ gutsy Githa Michiels, lying second in the women’s category with Ariane Luthi, had to pull out with a fever shortly before the race was due to begin.

That left Langvad and partner Kate Courtney (Investec Songo Specialized) with a comfortable lead in the women’s race and they duly extended it.

After a solitary night in Worcester, the race transitioned to Wellington via the testing 113-kilometre (1800m of climbing) Stage Four.

In the men’s category, Cannondale Factory Racing’s Manuel Fumic and Henrique Avancini were on a mission to rectify their tactical mistakes on Stage Three, when they relinquished their lead and yellow jersey to Investec Songo Specialized.

Alban Lakata and Kristian Hynek (Canyon Topeak) pushed the pace of the leading pack early in the stage in a ploy to hurt Howard Grotts of Investec Songo Specialized. It worked – and Grotts, the first American to wear the yellow zebra jersey, had no choice but to call on his powerful partner, Jaroslav Kulhavy, for assistance.

‘I only had one speed out there today, so it was very tough for me but Jaroslav (Kulhavy) was helpful, riding at my pace,’ said Grotts.

Prologue winners Daniel Geismayr and Nicola Rohrbach (Centurion Vaude) showed their objectives early by taking the Dimension Data Hotspot but their efforts were short-lived after multiple attacks from Cannondale put them as well as Centurion Vaude, BULLS 1 and 2, Buff Scott MTB and Investec Songo Specialized in the hurt box.

‘We felt good. After Stage Three we wanted to show our strength in the technical terrain,’ said Fumic.

A telling move came at the 60km marker where Cannondale attacked in the Land Rover Technical Terrain Section, the Slanghoek Traverse. The two used their cross-country skills to gain a 40-second advantage over the yellow jersey group. Avancini was relishing the terrain and, with Fumic in tow, were able to increase their gap by a further 20 seconds heading into waterpoint three at 67km.

For the third stage in a row, Investec Songo Specialized suffered a puncture, with Canyon Topeak suffering a similar fate. Holding on to their yellow jerseys looked highly unlikely, but the ‘Czech Express’ Kulhavy had other plans.

With Cannondale up the road, Centurion Vaude made an attack of their own at the base of Bain’s Kloof Pass, which would prove to be the move of the day. They reeled in the Cannondale boys, who were experiencing some mechanical issues of their own, and attacked just before the summit.

‘Cannondale Factory Racing pushed really hard in the technical sections and we were behind in the rocky single-track. Jaroslav (Kulhavy) had some issues and we took the lead from the chasing group and we got away,’ said Rohrbach. ‘And when we reached the asphalt of Bain’s Kloof Pass we pushed really hard. When the climb kicked up we closed the gap on Cannondale Factory Racing and attacked.’

Fumic and Avancini would lose even more time and any hopes of regaining the yellow jersey on the day after a string of untimely mechanicals. The Investec Songo Specialized Express, driven by Kulhavy, fought back strongly with Buff Scott MTB’s Francesc Carretero/Luis Pinto and Karl Platt/ Urs Huber (BULLS) following on their heels. After a sizeable lead Cannondale Factory Racing were lingering in fifth place.

Despite the late charge by Investec Songo Specialized, Centurion Vaude took the spoils, sending a warning to their rivals in the process.

‘We really wanted to win today – especially after the disappointment of yesterday,’ said Geismayr. ‘We went for it and it paid off for us. We’re still in this race.’

PYGA Euro Steel continued their superb run of form in the Absa African Men’s special jersey race with a well-earned victory ahead of Marco Joubert and Dylan Rebello (Imbuko Momsen) and Timothy Hammond and Arno Du Toit (SPOT Africa). The win puts them 3.28,7 clear of Ellsworth-ASG on the general classification with SPOT Africa rounding off the top three. 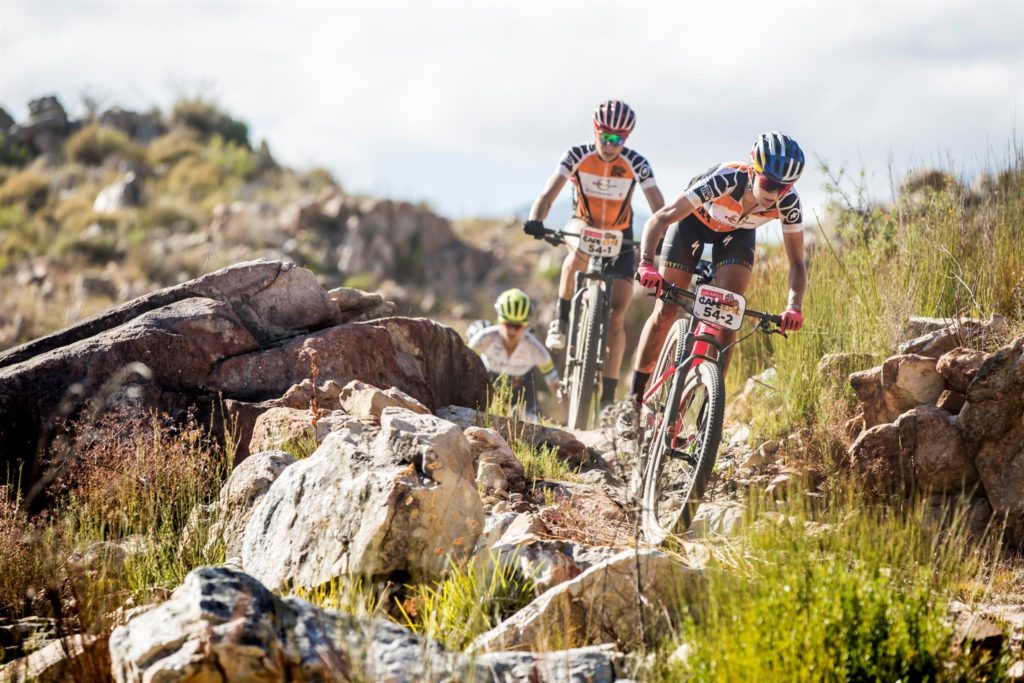 Langvad celebrated her birthday by winning what she called a ‘super brutal’ stage and extended Team Investec Songo Specialized’s lead in the women’s category to a near unassailable 32 minutes.

The Investec Songo Specialized pair broke away early as their rivals let them ride off the front. By the time they reached the finish, Langvad and Courtney could celebrate a win of over eight minutes over South Africa’s Mariske Strauss and Britain’s Annie Last (Silverback-KMC), with 2012 London Olympian Robyn de Groot and Sabine Spitz (Ascendis Health) just more than a minute further back.

It’s hard to see Langvad and Courtney not being crowned the 2018 champions when the race finishes at Val de Vie Estate on Sunday, but the leaders refuse to concede that their victory is finalised.

‘Day by day it looks better and better, but we’re not going to jinx anything because we know that even a tiny little issue can cause a lot of problems,’ said Langvad after crossing the line. ‘It was a really tough birthday present to myself. That was the hardest day out there so far this year. It was brutal – super brutal.’

‘We heard about Githa at the start and obviously, that is such a bummer. You never want to see your competition taken out by something so horrible and so unfair,’ said Courtney.

The real battle in the women’s category is now to decide the positions of the bottom steps of the podium, with Strauss and Last now holding a nine-minute advantage over De Groot and Spitz.

‘Tomorrow is going to be hard,’ said Strauss after they finished second. ‘But at least we can do our own thing and don’t have to worry about people around us. Like we saw last year, and this morning with Githa, anything can happen so you have to keep chiseling away at the big block and see what happens.’

Friday sees the competitors ride the second time trial of this year’s Cape Epic. The lumpy profile of Friday’s 39km race against the clock route – which loops out and back from the Wellington race village – suggests that big chunks of time can be won and lost if somebody is struggling. 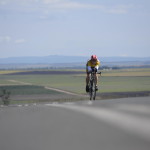 Continent’s top riders will be on show in Wartburg, KZN

By GARY LEMKE in Tokyo On the third day of staying in the Paralympic village bubble “it” finally dawned on me. “It” wasn’t the sheer visual aspect of the 4 000-plus Paralympians with disabilities all in the same environment of towering 17-storey apartments and surrounded by a 4km perimeter fence. Admittedly, that is the initial and most common conclusion of… END_OF_DOCUMENT_TOKEN_TO_BE_REPLACED