Ryan Gibbons, who won gold with Team SA at last year’s African Games, admitted he was ‘absolutely overwhelmed’ when he was named as one of eight riders to represent NTT Pro Cycling at the upcoming Tour de France.

Gibbons, the South African road race champion, will be one of two debutants who are set to be on the start line in Nice, France, on 29 August.

The 26-year-old will be looking to build on what’s been a strong 2020, including six top-10 finishes to go with the national title he won in Mpumalanga in February. It’s a selection that he’s described as ‘truly special’ and one in which he ‘hopes to do the jersey proud’.

‘I’m absolutely overwhelmed and thrilled to be selected for the Tour de France. It’s the pinnacle of the sport, and for any pro rider it’s a dream of theirs to get that notch on their belt. For it to become a reality is truly special,’ Gibbons said.

‘I have taken part in the Giro and the Vuelta multiple times but the Tour will be very, very special especially being in the colours as the national champion. I hope to do the jersey proud, and play my part in what will hopefully be a very successful race for NTT Pro Cycling.’

His power will be a key asset to the group of fast men that make up the NTT Pro Cycling selection for the race, as also making his Tour debut is the sprinter Max Walscheid. The German secured wins early in the season at the Tour de Langkawi, and has struck up an excellent partnership with fellow sprinter Giacomo Nizzolo.

The Italian rode his first Tour de France in 2019, and is confident ahead of 2020. He’s yet to win a career Grand Tour stage but has been in excellent form this year, taking WorldTour wins at the Tour Down Under, Paris-Nice as well as finishing fifth at Milano-Sanremo in early August.

Tour de France veterans Edvald Boasson Hagen and Roman Kreuziger both appear at the race for a tenth time, with the Norwegian having ridden all of the previous editions for the team.

The 28-year-old Dane Michael Valgren will start his sixth Tour de France in fairly familiar surroundings, with the race’s opening stages taking place on some of his home training roads in and around Monaco. Valgren made his debut at the event in 2015 under current team manager Bjarne Riis.

Domenico Pozzovivo had two strong days at the recently completed Criterium du Dauphine before the heat and difficulty of the parcours took its toll but he showed encouraging signs for the coming race. His selection comes, remarkably, just a year after his horror crash while training and he had multiple surgeries on his arm and leg. This will be the diminutive Italian’s third appearance at the race where previously he’s taken two top-10 stage positions, as well as finishing inside the top 20 overall in 2018.

Completing the team is the 26-year-old Austrian Michael Gogl who will play a crucial leadership role. He takes to the start line for a first time for NTT Pro Cycling, having ridden the race twice before. 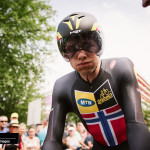 TDF’s African team take a breather ahead of the mountains

Stransky up for Epic challenge

Tokyo looms, again, We don’t know for sure in what shape of form the Olympics and Paralympics will take place in July to September and if anything 2020 taught us to take nothing for granted. What we do know is that if Tokyo 2020 +1 does go ahead, it will do so against a new-found back drop where simply taking… END_OF_DOCUMENT_TOKEN_TO_BE_REPLACED