SA’s rising superstar Chad le Clos was at it again in Stockholm on Sweden on Saturday evening’s first night of the FINA/Arena Swimming World Cup event.

The KwaZulu-Natal swimmer took home a gold and silver medal on the first day of competition.

Le Clos, who is currently sitting on top of the points table after his six gold medals in Dubai, secured his gold in the 400-metre individual medley race. The Durbanite was in the lead from start to finish when he touched the wall in a time of 4min 03.10sec.

It was a tough battle in the 200m butterfly between Le Clos and Japan’s Hidemasa Sano. The South African was in the lead for the first 50m but slowed to end second, clocking a silver time of 1:51.88. Sano’s time of 1:51.33 won him the gold with the bronze going to Poland’s Pawel Korzeniowski in 1:53.93.

The final day of the Stockholm leg of the FINA/Arena Swimming World Cup will take place on Sunday and will be followed by Moscow (18-19 October), Berlin (22-23 October), Singapore (4-5 November), Beijing (8-9 November) with the final leg taking place in Tokyo (12-13 November). 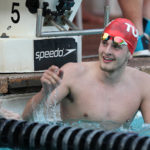